Gifts galore as Liverpool and Arsenal serve up Christmas cracker 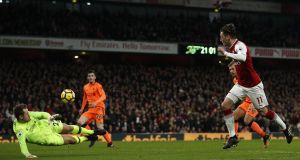 Sometimes it is better simply to glory in the madness of it all. Arsenal had been abject in the first half. They trailed to Philippe Coutinho’s header and the damage ought to have been heavier. The boos at half-time were loud and angry. Liverpool had been excellent.

To say that the game was turned upside down inside five second-half minutes would be the understatement of the season. Out of nowhere Arsenal scored three times. Simon Mignolet was horribly culpable on Granit Xhaka’s equaliser but he was merely the lead character in the latest defensive horror show from Liverpool against a leading club.

The mood inside the Emirates Stadium went from poisonous to party time. Mesut Özil’s third for Arsenal was a cracker. How had this happened? Jürgen Klopp stared into space. It would have been a crime if Liverpool had departed empty-handed and, mercifully for the travelling fans, they did not. Emre Can played in Roberto Firmino and, amid shoddy Arsenal marking, he shot and Petr Cech could not keep it out.

Klopp lost it. He hurled his water bottle down and it drew a furious response from the Arsenal supporters in his vicinity. Somebody threw a water bottle towards him. Klopp would later go over to apologise. He need not have done. It was an occasion that dragged everybody through the wringer.

It had seemed like a contest between the immoveable object and the irresistible force at the outset – well, almost. Manchester United had managed to beat Arsenal here but, that defeat aside, Wenger’s team had entered the fixture having carried all before them on home turf. Liverpool, on the other hand, were in free-wheeling away form. One pre-match statistic stood out: Klopp’s team had scored 16 times in their previous four away league fixtures.

Wenger stuck with his 4-3-3 system, even though Shkodran Mustafi was back to fitness – the defender started among the substitutes – and it was noticeable how Arsenal did not look to press too high up the field. The respect or wariness was clear. Playing Liverpool can resemble a walk in the park with a lion on the loose – generally fine and then, suddenly, not fine at all. Arsenal were determined not to be mauled on the counter.

Wenger had certainly shown his faith in Ainsley Maitland-Niles, starting the 20-year-old at left back and putting him up against Mohamed Salah, the league’s top goalscorer. Midway through the first half Liverpool twice overloaded on Maitland-Niles’s side and, twice, they came close to something tangible. On both occasions the threat came from deep crosses for Firmino. Cech saved the striker’s first header; the second one needed a touch from a team-mate in front of goal. It did not come.

The warning signs were there for Arsenal and it did not come as a surprise when Liverpool went ahead. The manner of the goal was entirely predictable. James Milner, who had come on after Jordan Henderson pulled a hamstring, drove a ball up the right flank for Salah, who was tracked by Laurent Koscielny and, rather abruptly, it was two on two for Liverpool. Salah’s cross deflected up off Koscielny for Coutinho, who had burst forward to make the extra man. He looped his header over Cech.

The mood among the home supporters darkened and the remainder of the first half was an ordeal for them and their team. Liverpool could have made the points safe. Firmino, who set the tone with his energy, curled inches over; Dejan Lovren should have found a team-mate following Coutinho’s chipped free-kick and Cech denied Salah one-on-one after a slip from Koscielny. Sadio Mané scissor-kicked the rebound just over, with Cech grounded.

The Arsenal fans had jeered Alex Oxlade-Chamberlain, who was among the Liverpool substitutes, on his return to the club. They turned on their own players when the half-time whistle went. At no point in the first half did they threaten Mignolet’s goal. It was all too tangled and easy to telegraph from them.

It would get worse for Arsenal before it got better. Salah had worked Cech on the break early in the second half before he set off on a run from deep inside his own half. He played it to Firmino, went for the return pass and three red shirts decided not to go with him. Confronted by Mustafi, who had replaced the injured Nacho Monreal at half-time, Salah picked his spot serenely.

Game over? It looked that way. Instead it was the trigger for an extraordinary Arsenal fightback and, it had to be said, a scarcely conceivable Liverpool meltdown.

Joe Gomez might have been the only person inside the stadium who did not see Alexis Sánchez stealing in on him to meet Hectór Bellerín’s cross. Gomez froze; Sánchez headed home. Mignolet’s error in the next Arsenal attack was more glaring. Xhaka’s shot from distance packed a punch but it did not seem to swerve. Mignolet stuck out a weak hand and tipped the ball into his net.

When Arsenal went in front the home crowd lost their senses. Jack Wilshere and Xhaka played in Özil and he swapped passes with Alexandre Lacazette. The striker’s back-heeled return was a beauty and Özil clipped coolly over Mignolet. The last word, however, would go to Firmino. – Guardian service