All in the Game: Mourinho’s born-again body language bodes well for Spurs

Metallica rocks in the dressingroom; Terry’s dodgy timeline; Tweet of the week; word of mouth 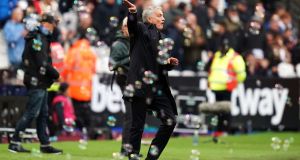 If you’d a Euro for every word written last week about Jose Mourinho’s arrival at Spurs, you’d probably be able to buy several Harry Kanes, but maybe the best piece of all was the one in the Daily Mail with body language expert Judi James.

“Was Jose really smiling or was it just wind,” they asked her after Mourinho’s first press conference. So, she shared the results of her analysis.

“The beaming, Santa version of Jose never really managed to be totally congruent and convincing. Parts of his face did attempt a smile, with some dimples and some eye-scrunching but the corners of his mouth remained turned down, suggesting the effort wasn’t totally successful.

“The old Jose could be all about that jutting bottom lip ‘sulk’ gesture but this was Jose trying to use a born-again approach, showing he could be fun. His body language destination was to let us know how happy and excited he was with his new job but the smiles did rather cave in under pressure to perform them.”

When it comes to winning, Metallica rocks

Former Blackburn Rovers defender Gael Givet reminisced with L’Equipe last week about the motivational skills of Sam Allardyce during their time together at the club.

Ahead of playing Manchester United in 2010, Allardyce decided his squad needed some inspiration so in the dressingroom before the game “he put on a projector and showed us a montage of the films ‘Gladiator’ and ‘300’. In short, warriors with swords. We were all going: ‘Ahhhh!’ [mimics a warrior waving a sword about the place].”

What he should have done was play them some Metallica, as Slaven Bilic did for his West Ham players ahead of a trip to Anfield in 2015.

“It was Roy Keane who said you can’t play Abba before a game, and I agree with that,” the now West Brom manager told the Daily Mirror last week. “It was 50 years since we had beaten Liverpool at Anfield. The players had Red Red Wine from UB40 playing in the dressingroom. “I’m like, ‘Red Red Wine? That’s for a romantic dinner, it’s not a war song!’ So I said ‘Sorry, lads’ and I put on Whiskey In The Jar – the Metallica version.”

Did it work? Whack for my daddy oh, it most certainly did. “We won 3-0.” Metallica >Gladiator.

Terry’s timeline is a little iffy

Poor John Terry (and they’re three words you never thought you’d see together) got the mother of all slaggings last week after a chat he had with Dubai Eye when he explained why Mo Salah and Kevin De Bruyne didn’t make it at Chelsea.

“Mourinho didn’t have time to put them in the team or take out a Duff or Robben because we were winning every single week. So, if you come in and you are 10 or 20 per cent below the standard of Duff and Robben, who were scoring 20 goals a season each, you are not going to make that team. No chance. Fair play to them, they’ve gone elsewhere and proved they’re good enough, but at that time they were not good enough for Chelsea.”

As the world and its mother pointed out, the form of Damien Duff and Arjen Robben could hardly have been a barrier to Salah and De Bruyne’s progress at the club. Duff left Chelsea in 2006, Robben in 2007 – De Bruyne didn’t arrive until 2012 and Salah not until 2014. Apart from that, it was a solid theory.

How did Flamengo’s Twitter person react to Gabriel Barbosa’s 92nd-minute winner for the club against River Plate in Saturday’s Copa Libertadores final? Quite calmly.

“Why shouldn’t he go to Arsenal if he wants to? If you go in there and start winning football matches, they would have taken Saddam Hussein when he was about. The fans don’t give a monkeys. If you start winning every week, they’re singing ‘there’s only one Saddam’.” – Harry Redknapp advising Arsenal to hire Mauricio Pochettino now that Saddam Hussein is unavailable.

“I’ll be your father, your friend, your girlfriend, whatever you want.” – Jose Mourinho’s message to his new Spurs players who were, presumably, left a bit frightened.

“I have already spoken with him and I asked him if he was Dele or Dele’s brother. He told me he was Dele. ‘Okay,’ I said. ‘Play like Dele’.” Jose’s advice to Dele Alli on his arrival at Spurs - it worked too, Dele playing like Dele rather than Dele’s brother against West Ham.

“I advise my players to have sex for short periods, with the minimum of effort and preferably with their wives because then you don’t have to be exceptional.” – Inter Milan gaffer Antonio Conte had some explaining to do when he got home.

“The Brummie accent is no problem. Don’t forget, I played for Everton and lived on Merseyside. And when Walter Smith was the manager there were eight to 10 Scots in the dressingroom, so this place is a piece of cake.” – Slaven Bilic on finding Birmingham natives considerably more comprehensible than most of the Everton dressingroom back in the day.

“I’d love to coach Arsenal. How much fun would that be! They’ve had a few problems, haven’t they?” – England rugby coach Eddie Jones eyeing up Unai Emery’s job – and this was before Saturday’s shambles against Southampton. Eddie’s phone is possibly ringing as we speak.

That’s how many goals Dubliner Eoin Doyle has scored for Swindon in League Two this season, his winner for them on Saturday his 10th in seven games, making him the leading scorer in the top four divisions in England. No wonder they call him the ‘Ginger Pele’.

1 Ireland v Scotland: Doris’ day as Caelan set for first cap
2 Six Nations: Pundits, journalists and players have their say
3 The Offload: Doris, Kelleher and Cooney to give Ireland a new look
4 Sports Extra customers get every LaLiga match at no extra cost
5 Rafael Nadal keeps his cool as Nick Kyrgios goes out swinging
Real news has value SUBSCRIBE
Crossword Get access to over 6,000 interactive crosswords