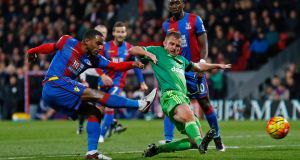 Sam Allardyce’s team recorded a victory earned on the back of hard graft and a late winner from Jermain Defoe that could prove a turning point in what has until now been a season of misery for Sunderland.

The visitors had been under the cosh for the majority of this game, in particular during the second half, as they got men behind the ball and looked to hit an in-form Crystal Palace side on the break. And they did just that on 80 minutes when Scott Dann, Palace’s hero when they beat Liverpool two weeks ago, made a mess of dealing with Billy Jones’s through pass and allowed Defoe to steal the ball and, having gone around Wayne Hennessey, roll it into an empty net.

The visitors had the first two chances of the match, a Steven Fletcher shot from inside the area that sailed over the bar while Patrick van Aanholt fired wide when the Dutchman clearly did not realise just how much time and space he had to deliver a more threatening effort.

Palace continued to probe but Wilfried Zaha, Jason Puncheon and Yannick Bolasie could not find the space around their opponents’ area to cause them panic. James McArthur charged forward on 30 minutes to deliver a speculative long-range shot which Costel Pantilimon caught easily .

Yohan Cabaye sliced a shot wide moments before half-time. For those of a Palace persuasion this was frustrating stuff. For Sunderland, it was a case of job half-done.

Pardew made a change a half time, bringing Sako on for Puncheon and switching to a 4-4-2 formation. The intention was clear: time to break the deadlock. Yet it was Sunderland who again threatened to score, as Sebastian Larsson swung in a corner which Sebastián Coates reached first with a glancing header. Cabaye hooked the ball off the line to safety.

Palace pressed forward and Cabaye had a shot which Pantilimon was forced to save low down. Sako was the next to cause Sunderland concern with an effort on 59 minutes that went just wide of the far post.

The hosts continued to push forward in search of a winner. But the more they did the more they left themselves vulnerable to a sucker punch and it arrived to leave Dann looking on in a state of anguish. Sunderland, in contrast, were euphoric.