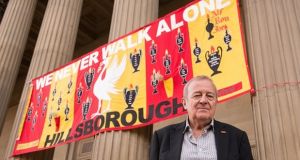 Prof Phil Scraton: ‘The word that was used was corralled and then we were penned. What do you corral? You corral animals. What do you pen? You pen animals. That was the mindset that underpinned crowd control at that time.’

Of course there are no winners in the long battle for justice for the 96 victims of the Hillsborough disaster. For their families, a successful conclusion to the search for truth after so much heartache and so many lies was as much of a victory as they could have hoped for.

For others, says Prof Phil Scraton, the Belfast-based academic who was central to exposing the Hillsborough cover up, the legacy of events in Sheffield on April 15th, 1989, is a little more tangible.

The lessons, he reckons, are all around us just now; most obviously in London, where Grenfell Tower survivors and families of the deceased face a fight of their own to find the truth behind the fire that killed so many.

“The relationship between Hillsborough and Grenfell is remarkable,” says Scraton, author of Hillsborough: The Truth and a key member of the Hillsborough Independent Panel whose report finally marked a turning point in the campaign to dismantle the deliberate lie that the behaviour of drunken fans was to blame for the deaths that day.

“What we are now seeing in Grenfell is a group of organised families and people around them who are saying very clearly that ‘we are not going to have a situation like Hillsborough; we are going to force the inquiry and the investigation to address the broader issues’.

“We have already seen this week that the terms of reference of Grenfell have been expanded and extended in order to accommodate some of those themes. They have inherited the legacy of Hillsborough. I think that people realise now they can make their voices heard.”

It took an awful long time to make anyone listen in relation to Hillsborough, he admits, with the institutionalised contempt for football fans at the time a big part of the problem.

“If we look at the operational orders that the police used at the time; they would have a telephone-directory-thick kind of operational order regarding crowd behaviour and security but not a word on safety. That, to me, demonstrated the mindset.

“I experienced it personally because I was at many big matches,” says the Merseyside native and life-long Liverpool supporter, who might well, he acknowledges, have been on the terraces himself that day. “The word that was used was corralled and then we were penned. What do you corral? You corral animals. What do you pen? You pen animals. That was the mindset that underpinned crowd control at that time.”

The problem, he says, was similar to the attitude displayed towards certain minorities, the Irish included, something that contributed to different, sometimes oppressive policing styles. Ultimately, it led to some well-known miscarriages of justice in which, as with Hillsborough, the establishment stubbornly refused to acknowledge the wrongs that had been committed.

He describes the delay of more than a decade before the government acted on evidence he uncovered as “astonishing”. He discovered that the accounts of individual police officers who were at Hillsborough that day were systematically altered so as to portray the response of the force in a better light and shift blame for the casualties on to the fans themselves.

“We always have to be aware that the prejudices that are out there in our wider society are also held in our institutions.”

That, he says, has not changed even if Hillsborough has educated people to the realities of the situation with greater awareness helping to counter attempts by the authorities to limit or control investigations in quite the same way. Subsequent campaigns for greater police accountability have also achieved some significant results.

In terms of bricks and mortar, he suggests, the stadiums where football is played these days are so well constructed that a repeat of Hillsborough seems almost unthinkable although, he points out, there were deaths only a matter of weeks ago at a big game in South Africa and “there is always the propensity for serious accidents and serious negligence at a whole range of venues”.

Bricks and mortar, though, were incidental in the end to the Hillsborough story. The 96 ordinary football fans, the manner in which they were unlawfully killed were at its heart. Six men, including the senior police officer in charge of the ground that day, are due to go on trial for their part in the tragedy next month although Scraton believes that for some of the families, at least, a measure of closure has already been achieved.

“There are some people for whom the inquest verdict of unlawfully killed, the very heavy criticisms delivered by the inquest jury, that is sufficient. To them, that is the end. It vindicates their nearly three decades of campaigning and trying to progress the case through the dark days when nobody really wanted to know.”

The hope is that as a result of his and their rather heroic perseverance, the aftermath of Grenfell and other tragedies like it, might never be quite so dark again.

Prof Phil Scraton will be addressing the Parnell Summer School in Rathdrum, Co Wicklow this afternoon on Justice for the 96: Researching Truth, Delivering Justice in the aftermath of the Hillsborough disaster. Details at: https://tinyurl.com/ya8qd688