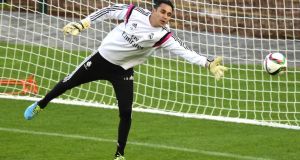 David de Gea’s transfer to Real Madrid is nearing completion after Manchester United blinked first in their staring contest with Real Madrid and agreed to drop their valuation for a cash-plus-player exchange involving Keylor Navas, the back-up goalkeeper at the Bernabeu.

United had initially wanted a fee in the region of €50 million to make De Gea the most expensive goalkeeper in history but instead have been negotiating a €42 million package that will see Costa Rica international Navas moving to Old Trafford to challenge Sergio Romero for the right to be De Gea’s replacement.

Reports in Spain have indicated that Madrid might not even be paying that much initially and, after a summer-long standoff, the deal represents a climbdown on United’s part, having previously insisted that they wanted a fee in excess of Gianluigi Buffon’s record €46.5 million move from Parma to Juventus.

Madrid have waited until the final few hours before the Spanish transfer deadline to make their move and United have decided to take the money rather than keep De Gea at Old Trafford against his wishes and lose him for nothing when his contract expires at the end of the next season.

United are expected to complete the signing of Monaco striker Anthony Martial before the English window closes on Tuesday having agreed to loan Adnan Januzaj to Borussia Dortmund until the end of this season.

In a busy day of transfer dealing at Old Trafford, the club also sold striker Javier Hernandez to German side Bayer Leverkusen for €10.5 million.

The Mexico striker, who spent last season on loan at Real Madrid, has signed a three-year contract and was completed on transfer deadline day in Germany.