Crystal Palace linked with a move for James McCarthy 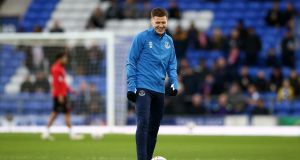 James McCarthy has been linked with a move away from Goodison Park. Photograph: Jan Kruger/Getty

Crystal Palace are again being linked with a move for Everton and Republic of Ireland midfielder James McCarthy, who made the bench for Tuesday night’s narrow win at Huddersfield, the closest he has been to involvement in a Premier League game in the year since he suffered a bad leg break in a game against West Brom.

McCarthy had been a target for Celtic only for his £50,000 (€57,300) weekly wage to prove an insurmountable obstacle for the Scottish side, it seems, but there has been other Premier League interest with both West Ham and Fulham both widely reported to be keen.

On the face of it, the departure of defensive midfielder Idrissa Gueye for PSG, which is expected to be completed for a fee of around €35 million, would move McCarthy slightly up the pecking order at Goodison but Marco Silva’s slowness to give the Irish international any playing time and rather lukewarm comments about him last week have tended to reinforce the sense that he will depart before Thursday night’s transfer deadline.

Tuesday’s win was an important one for the Merseysiders and for Silva, whose side had lost three of their previous four Premier League games and gone out of the FA Cup to Millwall at the weekend.

“We had a lot of looking in the mirror to do the last few days,” acknowledged Seamus Coleman after Tuesday’s game.

“We had a chat amongst ourselves. Our performances haven’t been good enough. We could only do what we could do today and that’s win, but we need to keep showing big character between now and the end of the season to give us those travelling fans something to be proud of.

“It’s a step in the right direction,” said the Republic of Ireland captain, “and I’m confident that this group of lads can bounce back and build a team to be proud of. It’s a clean sheet, Jordan (Pickford) has got us out of trouble a few times and he made a great save towards the end to keep us in it.

“We’ve all got to dig in to help each other in sticky situations and that’s what a good team does.”