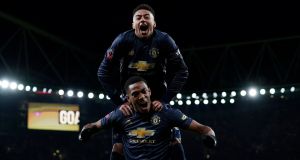 By now, it has become a familiar sight: Ole Gunnar Solskjær hugging his staff, eyes twinkling, applauding his players and celebrating the return of Manchester United, as we used to know them. Quick, incisive football, willing to take on anyone and, more often that not, coming out on top. Solskjær has even taken to chewing gum, Ferguson-style, with the wrappers scattered round his feet, and at this rate the only possible regret for his club is that they did not tire of José Mourinho earlier.

This was their eighth straight win since Solskjær was handed the role on a caretaker basis and the case for him taking the job full-time is building all the time, particularly now his restorative qualities even appear to stretch to Alexis Sánchez, who scored the opening goal on his return to his former club.

Jesse Lingard put in United’s second goal soon afterwards but perhaps the most impressive part of United’s performance was the way they withheld some fierce pressure from an Arsenal side that lost but did not play badly. A lesser team would have wilted, and perhaps Mourinho’s United would have, too. Not the current side, though. Solksjær’s team feel rejuvenated, epitomised by the transformation of Victor Lindelof in the heart of their defence.

Arsenal certainly gave it a good go after Pierre-Emerick Aubameyang’s goal late in the first half. Ultimately, though, United were much more clinical with their chances. Solskjær was once part of the best counterattacking side in English football. He seems to be building the modern team the same way and United’s third goal, via the substitute Anthony Martial, ensured their passage into the fifth round.

Solskjær, will remember the years when Arsenal against Manchester United was the biggest occasion in English football. It is a bit different now, with Granit Xhaka against Lingard about as spicy as it gets where once it was Patrick Vieira and Roy Keane, and two managers who greeted one another with an embrace, as opposed to the days when a handshake between Ferguson and Arsene Wenger involved no eye contact and only the briefest meeting of flesh on flesh. Solskjær, in keeping with the modern rivalry, was even gentlemanly enough to instruct Luke Shaw to kick the ball out when Sokratis, the Arsenal centre half, suffered the knee injury that ended his evening prematurely.

The only flicker of malevolence came on the occasions when Sánchez had the ball and Arsenal’s crowd reminded their former player what they thought of his decision to switch clubs a year ago. Even that, however, lacked real spite, quite possibly because the fans who were making their displeasure voluble must have known enough about the Chilean to realise he might take pleasure in turning down the volume.

Sánchez celebrated his goal with fists raised but did not go in for any shushing gestures. He did not have to rub it in because nothing will have hurt his former club more than the sight of him wriggling past Petr Cech to score with the kind of skill that has been seen only fleetingly during the last year.

For Arsenal, that was a devastating period bearing in mind Sánchez’s goal was followed three minutes later by Lingard adding another from a brilliant counterattacking move. Both times it was Romelu Lukaku with the decisive pass and, for the first one in particular, the striker’s through ball was weighted beautifully, completely deceiving the Arsenal defence.

Lukaku spent a lot of the match drifting into the space where Sead Kolasinac, Arsenal’s left-sided defender, occasionally vacated on his forward forays. It left Arsenal vulnerable to being caught on the break and Lingard’s finish, so calm and collected, was a joy, too. There was no power in his shot. No attempt to put his laces through the ball, the old-fashioned way. He simply controlled Lukaku’s pass, opened up his foot and rolled the ball into the bottom corner.

At that stage Arsenal were in danger of completely unravelling but Aubameyang’s goal, two minutes before half-time, gave a new sense of hope. Aaron Ramsey’s run and stepover created the danger in a congested penalty area. As the pass was flicked across the six-yard area, Alexandre Lacazatte could not get a full touch of the ball. Aubameyang was loitering with intent, hoping the ball would reach him, and left with a simple finish.

Arsenal would have been level a minute into the second half had it not been for a superb one-handed save from Sergio Romero to keep out Ramsey’s header and supply more evidence for those who believe David de Gea’s understudy has legitimate credentials to be recognised as the outstanding second-choice goalkeeper in the English game.

The tie had ignited and the second half was an absorbing spectacle. Arsenal had to be adventurous and that meant the introduction of Mesut Özil. Alex Iwobi was the man who made way but the substitution had to be delayed because of a nasty blow suffered by Laurent Koscielny after challenging Lukaku, falling to the ground and accidentally taking his opponent’s studs to the side of his face, leaving him with a gash below his left ear. Koscielny was unable to continue after eight minutes of treatment on the pitch and that meant Arsenal had lost both their centre halves, with all three substitutes used by the 64-minute mark.

Martial’s goal came from another counterattack, firing in the rebound after Petr Cech had saved Paul Pogba’s shot, and United made it through 10 minutes of stoppage time to seal the victory. – Guardian