City prove they are definitively the dominant force in Manchester

It is a derby, it is United; how could it not have been a night of furious passions and tension? 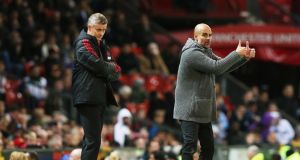 In prospect, six weeks ago, in that golden age when Manchester United didn’t have a permanent manager, the derby looked like being the biggest obstacle between Manchester City and retaining the league title.

History, perhaps, will continue to view it as such: it is a derby, it is United; how could it not have been a night of furious passions and impossible tension? And yet in the moment, once the initial United surge was over – there was, at least, some sort of reaction to Sunday’s humiliation at Everton – the overwhelming sense was of how vast the gulf between the sides has become.

That is 11 league wins in a row now for City, a run of absurd consistency. United battled, at least until going behind, but as Roy Keane pointed out that should be a prerequisite. The presence of a bit of fight, though, served only to highlight the difference in quality, a disparity highlighted by the way United set out with three central defenders shielded by three deep-lying midfielders – and nobody accused Ole Gunnar Solskjær of needless ideological negativity; breaking the game up was just the best way of trying to get something out of the game.

Taking the players to The Cliff training ground generated some sort of response but it was not enough. The danger is that Solskjær concludes he is not being nostalgic enough. So what next? A round of golf with Alex Stepney at Davyhulme? Get Bryan Robson to take the lads on an all-day bender at Pat Crerand’s pub?

When Solskjær began speaking of the values of old, it seemed a clever rhetorical tool. Get the old spirit back, remind the players of the privilege of playing for such a club, reforge the bonds with disaffected fans and try to heal the rift between the Mourinho loyalists and those who were actually watching what was going on. But that should have been a tool that allowed him to effect radical change under the guise of restoring the glorious past. The worry now is that Solskjær actually believes all this guff and thinks all that is required for United’s return to the top is the reimposition of Fergusonian values.

His refusal to use Ferguson’s car-parking space is, frankly, a little weird. It feels a worryingly small step from here to finding Ferguson in a rocking chair in the spare bedroom while the unnervingly mild-mannered Solskjær butchers potential rivals for his affection in the shower. Supply your own joke about taxidermy and spending his days arranging stuffed corpses of once proud beasts.

And while Solskjær attempts to reconjure 1999, the history that is actually being replayed is that of 30 years earlier and the chaos into which the club lapsed after the retirement of Matt Busby. City, meanwhile, seem successfully to be breaking free from their past. Nobody talks any more of Cityitis, the disease diagnosed by Joe Royle.

The difference between the clubs is summed up by the fact that City have had five title-winning managers but have won the league only five times, while United have had only three title-winning managers but have won it 20 times. The United way is of all-powerful leaders who bring great success but whose reigns are followed by long periods in the wilderness (respectively 41 years, 26 years and six years so far); the City way is of persistent inconsistency.

Pep Guardiola has a tendency to dismiss what came at City before the Sheikh Mansour takeover, which may be a little unfair on Frank Swift and Alec Herd, on Colin Bell and Tony Book, but is equally understandable. Whether or not he becomes the first City coach ever to retain the league title, whether he makes it five championships in six years, City are a different club now.

They are what happens when you take vast sums of money – and let’s for now ignore concerns about the source and whether that money has been spent within Uefa regulations – and use it to overhaul the entire infrastructure and ethos of a club. Long before he arrived, City had been built on Guardiola principles. This sort of consistency, this implacable pursuit of the title, is what a holistic approach, every department following the same basic philosophy to the same goal, can bring.

United’s patched up mish-mash of a squad, their skipping between managers of different types and different approaches, their leaking roof, is what happens when decisions are being made by people with little football expertise, appointing famous names almost at random in the hope of stumbling on a messiah, while doing nothing to upgrade the infrastructure. Solskjær might get the whole squad to sit down and watch the X-Files with a bottle of Two Dogs while worrying about the millennium bug, but reliving the 90s won’t get beyond United’s basic lack of long-term planning.

City show the way, show what planned investment can achieve – and that is why, for now, for the first time since perhaps the 1930s it is they who are definitively the dominant force in Manchester.