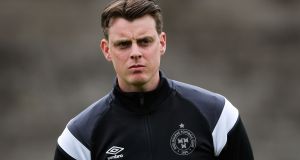 Waterford, who gave Daryl Murphy his debut off the bench, spurned chances through Alli Coote and Will Fitzgerald before Brennan connected with a George Poynton free-kick to nick it.

The result still leaves Waterford in third and Shelbourne in seventh but the away side are five points clear of the play-off spot with three games to play.

For Waterford, a second successive defeat damages their prospects of qualifying for Europe. Dundalk and St Patrick’s Athletic in the chasing pack both have games in hand to overtake them for a top-four finish.

Jack Brady was preferred to Colin McCabe in the Shelbourne goal and he showed his worth on 18 minutes by turning Coote’s shot around the post after Matt Smith had sent his fellow Scot clear.

Shelbourne also had first-half opportunities through Dayle Rooney and Ciaran Kilduff but had to withstand a period of second-half pressure from the hosts before pouncing for the points.

Substitute Murphy, on his first outing for his hometown club since returning from the UK, teed up Fitzgerald with 15 minutes remaining but he dragged his shot wide.

Swimming in the planet’s deepest, darkest waters is where Nuala Moore feels most alive 07:00
Great Escapes: When Daniel Day-Lewis became king of the ring 07:00
Ruben Neves earns Wolves a draw at Newcastle 22:37
Remote congress a hard slog as split season and sin bin make it through 20:19
Ireland’s defence points the way forward in Rome 19:45