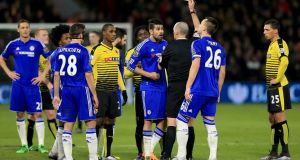 John Terry had bemoaned his belief that his Chelsea career would be denied its fairytale ending but, on this evidence, the champions’ entire title defence is likely to peter out in frustration.

Just as this team had dared to wonder if a respectable finish in the table might still be theirs, maybe in the Europa League places, they ran aground. The visitors may be unbeaten in 10 but Watford simply would not wilt.

Such has been the hosts’ eye-catching progress this year that, normally, escaping with a point from this arena might actually represent a commendable achievement. Yet the game of catch-up in which Chelsea find themselves does not permit dropped points such as this.

They huffed and puffed here, their rhythm disturbed by Watford’s own quality in possession, and could find no way through. The away fans massed in the Vicarage Road stand bellowed for their team to “attack, attack, attack” but it was to no avail. It is Watford, one of this season’s more refreshing stories, who have hoisted themselves to ninth. Chelsea still have work to do to achieve respectability.

Terry’s name had been chanted by the travelling supporters from well before kick-off; these fans seem to have been whipped into a permanent state of protest this season and were making known their discontent at the thought of the captain not extending his stay at Stamford Bridge into a 19th senior campaign. That contentious issue will be revisited over the coming months, though this was a test of the 35-year-old’s immediate form.

Watford had drawn in west London in Guus Hiddink’s first game on St Stephen’s Day and, once they had struck an upbeat tempo, stretched the champions again. The better opportunities were initially theirs. The local frustration was that none of those chances were taken.

The prolific Odion Ighalo draws the focus in Quique Sánchez Flores’s team but it was the delivery from the flanks which threatened to yield the forward reward.

José Holebas was a menace down the left, his sprint and sumptuous centre reaching Ighalo midway through the first half. The striker had found space between Terry and César Azpilicueta only for his header to be choked by Chelsea’s masked left back.

Sebastian Prödl, shoved to the turf early on by Diego Costa, thumped a header goalwards from Ben Watson’s corner for Thibaut Courtois to claim and the Belgian’s fingers were stung soon after by Étienne Capoue’s shot. José Manuel Jurado had set up that chance with a trademark wriggle among the clutter of bodies on the edge of the penalty box. That congestion rather summed up the play.

What consternation the hosts suffered was largely induced by Costa and usually courtesy of that constant desire to niggle and infuriate his markers. The Spain international had chalked up his seventh booking of the season before the break after wrestling with Juan Carlos Paredes in front of the dugouts and then squabbling with the Ecuadorian, who was also cautioned, while Mike Dean considered his sanction. The forward had missed Chelsea’s only real opportunity up to then, collecting a punt upfield and holding off Craig Cathcart before spitting away a shot which flicked off the defender and behind.

Costa’s discipline remains an issue with the forward so integral to Chelsea, not least with Radamel Falcao not even included in the club’s 22-man Champions League squad – he may yet depart for China – and Alexandre Pato, a player effectively in pre-season, with work to undertake on his fitness. Yet, even with Costa muscling his way between defenders Hiddink’s team were far too disjointed as an attacking force for long periods.

Mikel John Obi’s deflected shot, looping up off Watson, was their first on target as too much of the intricate approach play was eclipsed by Watford’s energy. When Costa did reach the by-line and cut the ball back Oscar skewed his shot wide.

Costa was later denied from distance by Heurelho Gomes though, by then, the away support were pleading for Eden Hazard’s introduction from the bench. This contest needed a spark, a flash of brilliance to prise a defence apart, with last season’s player of the year eventually flung on with 17 minutes to go.

His impact was almost immediate, Willian liberating him to the by-line as Cathcart played the Belgian onside. The pull-back was perfect for Branislav Ivanovic but his battered attempt was turned away brilliantly at the near post by Gomes.

The goalkeeper had suddenly come into his own, charging out to suffocate the ball at Hazard’s feet and then springing to his right to paw away a deflected close-range header from Costa. That was a magnificent save and preserved Watford the point their display had merited. For Chelsea, even with their unbeaten run, a sense of deflation persists.

Leaving Cert prep forces Beibhinn Parsons out of rest of Six Nations 15:01
Kieren Westwood: ‘I feel obliged to clear my name and defend myself’ 14:01
All in the Game: No Moore medals for Steven Gerrard 12:34
Tokyo marathon cancel next month’s mass participation race 13:20
Added Time: What can be done about worrying trends at schools rugby matches? 11:48