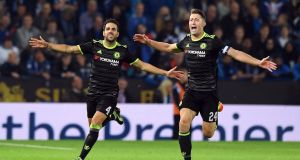 Chelsea’s ambitions stretch well beyond winning the EFL Cup this season, yet there was no hiding what this victory meant to Antonio Conte and his players. The Chelsea manager was a picture of pumped-up raw emotion on the touchline as Cesc Fàbregas, whose extra-time goals settled a thrilling contest, ran half the length of the pitch to celebrate the moment that sealed their place in the last 16.

With only 32 minutes of Premier League football behind him this season and doubts about whether he fits into Conte’s plans, Fàbregas’s reaction was understandable. It was a wild and chaotic game, with Shinji Okazaki scoring twice to put Leicester 2-0 ahead before goals from Gary Cahill and César Azpilicueta either side of half-time hauled Chelsea level.

Claudio Ranieri’s side were then reduced to 10 men towards the end of normal time when Marcin Wasilewski, who was already on a booking, picked up a second yellow card for striking Diego Costa with his forearm. It was Fàbregas, though, who did the most damage.

The last time Ranieri and Conte came up against each other was in March 2012, Juventus beat Internazionale 2-0 on that occasion and the older of the two men ended up getting the sack at Inter. Four and a half years on they met again and although the stakes were nothing like as high for either of them, there was no shortage of commitment on the pitch.

Frenetic and open, the game started at quite a pace, with David Luiz’s raking pass from deep creating an early chance for Pedro that was ruled out for offside – it was a tight call but the assistant referee got it spot-on – and Leicester’s ability to break with such alacrity causing no end of problems for the visitors at the other end of the pitch. Throw in some calamitous Chelsea defending and a couple of predatory touches from Okazaki, and all the ingredients were there for a thrilling first half.

For Conte, however, there was much more to endure than enjoy during that period. Chelsea were an accident waiting to happen at the back, with Cahill’s careless early mistake, when Okazaki robbed the England international of possession after a heavy and clumsy touch deep inside his own half, setting the tone for some slapstick defending.

The Premier League champions ruthlessly punished Chelsea, with Okazaki seizing his chance to shine. The opening goal showed the best of Leicester and the worst of Chelsea. Darting in from the right flank, Demarai Gray played the ball into Okazaki, who released Ahmed Musa in space out wide.

The Nigerian whipped in a cross that Chelsea made a pig’s ear of dealing with as the ball bounced and ran through to Azpilicueta, striking the full-back on the chest and rebounding to Okazaki. Asmir Begovic came across to try and block but Okazaki, with the angle against him, expertly lifted his header over the Chelsea keeper and across the line before Azpilicueta could keep it out.

Although Michy Batshuayi ought to have done better with a free header from Pedro’s cross, Leicester continued to threaten through the direct running of Musa, Jeffrey Schlupp and Gray.

It was Okazaki, though, who was again in the right place at the right time to double Leicester’s lead. Pedro’s clearance was desperately poor, Andy King took the ball on his chest and as the Chelsea defence charged out, the Wales international cleverly lifted it into the path of Okazaki. He took a touch to get it under control and, once again from a tight angle, managed to beat Begovic, with the ball taking a deflection off David Luiz.

Chelsea badly needed a break to get back into the game and it arrived on the stroke of half-time, when Cahill got away from Wes Morgan to head a Fàbregas corner over the line, changing the complexion of the tie.

The significance of that goal became clear within four minutes of the restart. This time Leicester were guilty of sloppy defending, with Wasilewski’s header not carrying nearly enough distance, yet there was still much to admire about the way Azpilicueta connected with the ball on the volley, his sumptuous shot from 22 yards flashing past Ron-Robert Zieler and into the top corner.

The introduction of Costa midway through the second half added more intrigue. His impact was instant, setting up a chance for Batshuayi, whose brilliant left-foot shot was wonderfully saved, and two minutes later Costa squandered an opportunity of his own. David Luiz exposed Wasilewski’s poor positioning with a ball over the top but Costa steered wide.

Yet back came Leicester. Musa, tearing through in the inside-right channel, after David Luiz misjudged a high ball, was denied at the near post by Begovic. Then King headed over from inside the six-yard box after the substitute Leonardo Ulloa flicked on. Costa had a couple more chances and was also on the receiving end of that blow from Wasilewski prior to extra time.