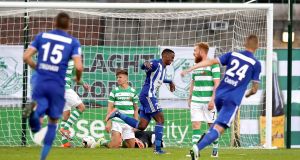 Stephen Bradley’s side will head into the second leg of this Europa League tie knowing now that they can score goals against their Czech opponents and that may be enough to sustain their hopes of progression but the ease with which they concede has left them up against it.

In fact, but for Graham Burke’s strike seconds from the end of injury time the tie would already look to have been settled.

It was, at least, a memorable night for the midfielder who had, just after the break, also scored his side’s first but poor defending proved to be the home side’s downfall. A week ago, the Rovers back four rode their luck but towards the end this time, against better opponents, it simply ran out.

The hosts had looked from the outset as though they were in for a tough night of it with the Czechs doing enough even in the opening minutes to suggest they possessed the adequate qualities to unsettle their opponents when Bradley’s players were in possession, while keeping the ball rather more effectively themselves.

Golgol Mebrahtu, a Sudanese born refugee from the war between Ethiopia and Eritrea who ended up getting an underage cap for Australia, looked a particular handful up front and with his willingness to chase things down prompting errors early on from which his team almost profited.

His more telling contribution came 35 minutes in, however, when he was first to a Tomas Prikryl cross from the right side at the near post and produced a header that left Tomer Chencinski with little or no chance.

It was a major setback for Bradley’s side after what had actually been a much better spell for them. Ronan Finn and Brandon Miele had both started to pose a threat when pushing forward from midfield and the home side carved out a couple of decent chances to take the lead. But their finishing was persistently poor with Gary Shaw sending what was perhaps their most clearcut shooting opportunity straight into the arms of the visiting goalkeeper.

At the back they got a taste of the trouble they would get themselves into if they conceded frees around the area when Jakub Rada curled one over the wall and towards the inside of the left hand post, but Simon Madden was there to clear off the line in what was clearly a previously planned counter measure.

For an hour they coped well enough from play although they were opened up more than once by 35-year-old Marek Matejovsky, formerly of Reading, who clearly retains an eye for a through ball.

His best of the first half required Roberto Lopes to chase down Mebrahtu, which the Dubliner did pretty impressively, but just over an hour into the game the former Czech international produced some great footwork to sidestep a challenge inside then a low angled ball that plunged the home side’s back four into turmoil. Jan Chramosta turned it back across the face of the goal with his first touch and Mebrahtu was on hand to tap in.

It seemed harsh on a home side whose enterprise in the opening minutes had allowed Burke to pull them level with a cracking shot on the turn but none of his teammates was quite so ruthless with Finn and Luke Byrne, like Shaw before them, firing longer range efforts directly at Jakub Divis when they had had time, perhaps, to make the goalkeeper work a little harder.

Prikryl showed how it should be done with 10 minutes remaining when, once again, Matejovsky released him into space and Chencinski had to prevent his low drive creeping in at the near post. By then, the back four’s concentration seemed to be slipping and Chramotsa made it 3-1 Chramosta with an unchallenged header from close range.

That seemed to be that until Burke pulled one back with seconds remaining but completing the comeback next week will take a bit of doing.

1 Colin Byrne: Hard to understand how golf has become the bogey man now
2 Fresh faces and renewed appetite: Is this a new era for Irish rugby?
3 Andrew Porter fronting up to responsibility of starting Ireland role
4 Andy Farrell reshuffles his hand for rescheduled Italy game
5 Level 5 golf shutdown: Ireland one of few countries to close courses
Real news has value SUBSCRIBE
Crossword Get access to over 6,000 interactive crosswords