Chelsea agree deal to sign Ziyech from Ajax in summer

London club yet to confirm terms for Moroccan winger, the Dutch footballer of 2018 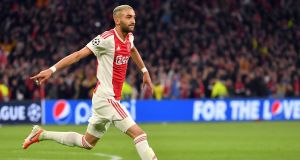 Chelsea have agreed a deal for the summer signing of Hakim Ziyech from Ajax.

The Blues must now confirm personal terms with the Morocco winger, who will join Chelsea on July 1st for an initial fee of 40million euros.

Both Chelsea and Ajax confirmed the deal, with Frank Lampard securing his first signing as Stamford Bridge boss.

Lampard and Chelsea were unable to make any headway on recruitment in the January transfer window, leaving the manager frustrated not to bolster his squad.

Ziyech, who was named Dutch footballer of the year in 2018, was one of Lampard’s top targets, however, and Chelsea have moved quickly to lock down a deal for the 26-year-old, which should represent excellent value given market constraints.

“Chelsea Football Club has reached an agreement with Ajax to sign Hakim Ziyech this summer,” read a club statement.

“The move is subject to the player agreeing personal terms and he will remain at the Dutch club for the rest of this season.”

Ziyech has laid on more than 20 goals in each of the last three seasons, already teeing up 21 at Ajax this term. In his 160 matches for the Dutch side, the Moroccan has scored 49 goals.

And Lampard wants the pacy winger to add an extra dimension to his Stamford Bridge squad.

The west London club saw their Fifa transfer ban lifted on appeal to the Court of Arbitration for Sport but were unable to capitalise by making any mid-season recruits.

The Blues could still net as much as £150 million (€180 million) from Eden Hazard’s big-money transfer to Real Madrid last summer, and Lampard wants to dip into those funds to strengthen his youthful squad.

“Ajax and Chelsea have reached an agreement for the transfer of Hakim Ziyech,” Ajax confirmed in a statement.

“The player will join the Premier League club on July 1st, 2020, and will finish the season in Amsterdam. The clubs have agreed a deal of €40 million. This sum could potentially increase to a maximum of €44 million, with variable factors.”

1 Avoid the treadmill at all costs – marathon training in the 2km radius
2 Sonia O’Sullivan: Taming The Tan gave us one last roll of the dice before shutdown
3 Ireland’s underage rugby stars miss out on chances to shine at Easter
4 Reality Bites – Tales from the new normal: Shane O’Donnell
5 Rich Premier League clubs way off the mark in cutting staff pay
Real news has value SUBSCRIBE