Casilla blunder costs Leeds while Hogan wins it for Birmingham 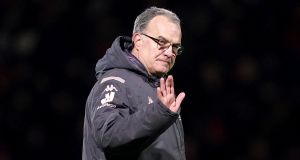 A goalkeeping blunder from Kiko Casilla helped Brentford hold Leeds to a 1-1 and further stall the Yorkshire side’s push for promotion from the Sky Bet Championship.

Marcelo Bielsa’s men arrived at Griffin Park having won just two of their last 11 games in all competitions and the Bees, who would have gone above Leeds and into second with a victory, were gifted the opening goal in the 26th minute after visiting stopper Casilla failed to deal with a backpass from defender Liam Cooper and Said Benrahma gratefully slotted home.

Leeds — a point clear of Fulham, who have a game in hand — equalised in the 38th minute when Cooper knocked a loose ball in from close range following a corner.

Fellow promotion hopefuls Nottingham Forest were dealt a blow as Charlton clinched a 1-0 success at the City Ground.

The Addicks went in front after 24 minutes through Lyle Taylor, who lashed the ball in at the far post after a break down the left from Naby Sarr.

At the other end of the table, Irish striker Scott Hogan heaped more woe on beleaguered Barnsley as his swivelling strike in the 76th minute — 16-year-old Jude Bellingham doing the leg work to set up the Aston Villa loanee — boosted the Birmingham up to 14th.

Ten-man Wigan were grateful for a late own goal from Middlesbrough defender Harold Moukoudi as they took a point from a 2-2 draw.

The visitors saw an effort from Ashley Fletcher ruled out for offside, before Wigan took the lead in the 29th minute when Sam Morsy drilled in a low shot from the edge of the penalty area. The hosts had Chey Dunkley dismissed after a second yellow card in the 62nd minute and Boro made them pay within two minutes, Lewis Wing equalising with a deflected free-kick.

Four minutes later the turnaround was complete when Wing deceived goalkeeper David Marshall with a long-range shot. However, there was to be a late twist as on-loan St Etienne centre-back Moukoudi put through his own net with a misjudged diving header in the 76th minute.

Elsewhere, Blackburn beat Hull 3-0 with a flurry of late goals at Ewood Park.

Irishman Darragh Lenihan finished amid a goalmouth scramble in the 73rd minute and Adam Armstrong’s superb drive into the top corner six minutes later tamed the Tigers before Dominic Samuel slotted in a third to kill off the tie and strengthen Rovers’ prospects of reaching the play-off places.

Swansea and QPR shared a goalless draw at the Liberty Stadium to frustrate the hosts’ hopes of breaking into the top six.