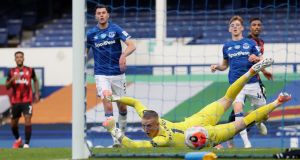 Bournemouth’s 3-1 victory at Everton was too little, too late as their five-year stay in the Premier League came to an end at Goodison Park.

The Cherries needed to win and hope Aston Villa and Watford both lost but despite the Hornets going down at Arsenal, Villa’s draw at West Ham meant that at no point did Eddie Howe’s side move out of the bottom three all afternoon.

Goals from Josh King and former Liverpool striker Dominic Solanke either side of Moise Kean’s equaliser – the striker’s first goal since his last Premier League start in January – and a late one from Junior Stanislas after a Jordan Pickford error ended Everton’s 11-match unbeaten home run.

However, there was no favour from the Hammers, whose game against Bournemouth’s relegation rivals ended 1-1 and by the time the whistle had blown in that game Howe and his players had already trudged slowly off to the dressingroom heading for the Championship.

A second win in their last five matches was not enough to save the south-coast club, whose nine league wins this season highlight just how poor a campaign it has been.

That paltry return equalled the club’s record of fewest victories set in 1933-34 when they were in Third Division South.

Watford’s five-year stay in the Premier League ended as they were relegated following a final-day defeat at Arsenal.

The Hornets knew their fate was out of their hands heading into the game at the Emirates Stadium and, despite rallying after slipping three goals behind, they ultimately fell to a 3-2 loss.

Pierre-Emerick Aubameyang hit a first-half brace either side of Kieran Tierney’s first Arsenal goal – but Mikel Arteta’s side will have to be better than this showing if they are to beat Chelsea in the FA Cup final next week.

Troy Deeney’s penalty reduced the arrears before the break and former Arsenal man Danny Welbeck pulled another back – but, with Aston Villa drawing at West Ham and Bournemouth beating Everton – Watford finished 19th.

Tottenham booked their place in next season’s Europa League after a 1-1 draw at Crystal Palace.

Spurs had to better Wolves’ result at Chelsea to guarantee a top-six finish and they did the job as Harry Kane’s 14th goal in 19 games under Jose Mourinho helped earn the decisive point.

It was far from convincing, though, as Palace levelled through Jeffrey Schlupp and were the better team in the second half at Selhurst Park as they ended a seven-game losing streak.

Nonetheless, to secure their place in Europe has to be heralded as as impressive achievement as they were seven points off sixth after defeat to Sheffield United earlier this month, but a six-game unbeaten streak has got them there, even if it is on goal difference.

For Roy Hodgson, the manner of their display will give him reason to be optimistic after a horrible few weeks of the return.

Sadio Mane came off the bench to cement a comeback victory at Newcastle as champions Liverpool set a new club record of 99 Premier League points for the season.

Trailing to Dwight Gayle’s opportunist strike after just 24 seconds, Jürgen Klopp’s men levelled through Virgil Van Dijk before the break and then won it 3-1 courtesy of Divock Origi’s 59th-minute missile and Mane’s fine curling effort at the death to claim a 32nd league victory of the campaign.

The depleted Magpies worked hard throughout, but found themselves increasingly stretched as Klopp belatedly turned to his big guns with time running down.

Manchester City took their goal tally past 100 as they wrapped up their campaign with a thumping 5-0 win over relegated Norwich.

Kevin De Bruyne struck twice and equalled the competition’s single-season assist record by setting up Raheem Sterling in a one-sided contest at the Etihad Stadium.

Gabriel Jesus and Riyad Mahrez also got on the scoresheet in a game that saw veteran playmaker David Silva make his final Premier League appearance for the club.

To round off a good day for Pep Guardiola’s City, Ederson registered a 16th clean sheet of the campaign to win the Golden Glove.

There was no Golden Glove for Nick Pope nor a Premier League points record for Burnley as Yves Bissouma and Ireland international Aaron Connolly fired Brighton to a 2-1 victory at Turf Moor.

Bissouma’s fine curling effort after 20 minutes ended Pope’s hopes of a 16th clean sheet of the season, allowing Manchester City’s Ederson to claim the Golden Glove as Pep Guardiola’s side finished with a 5-0 win over Norwich.

Chris Wood drew Burnley level just before half-time, but Connolly’s goal five minutes into the second half left the Clarets level with the 54 points they collected in 2017/18 as they lost at home in the league for the first time since New Year’s Day.

Brighton, who moved up to 15th with the win, will go into the shortened off-season taking encouragement from a positive display as they posed a regular threat on the counterattack and looked capable of scoring more.

Che Adams’s brace inspired Southampton to an impressive 3-1 comeback victory against his former club Sheffield United as Ralph Hasenhuttl’s men ended the season on a high.

Chris Wilder’s side have earned plenty of plaudits for a superb first season back in the Premier League and Saints also deserve immense credit for the way they have turned relegation form around.

Nobody could have foreseen Saints finishing 11th when they were humbled 9-0 by Leicester in October, but nine months on they blunted the Blades as Adams’s double and a Danny Ings penalty secured victory at St Mary’s.

Saints have been one of the stars of ‘Project Restart’ and head into the summer on the back of a seventh match unbeaten – something that had looked unlikely during a shaky first half.

Wilder’s men took the lead through John Lundstram and would have put the match to bed had the midfielder not been denied a second by the superb reflexes of Alex McCarthy.

Saints overcame that wobble and kicked on after the break, with Adams following a superb near-post finish with another emphatic strike midway through the second half.

Ings scored a penalty late on but fell one goal short of the Golden Boot after a season to cherish for the striker, with the Blades ending the season in ninth.