Championship round-up: Ryan Manning makes up for own goal with QPR’s fourth 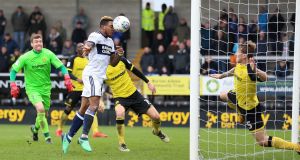 Striker Assombalonga’s first goal since St Stephen’s Day salvaged a last-gasp 1-1 draw for Middlesbrough that denied the hosts a priceless win in their bid to avoid the drop.

Marvin Sordell’s first goal in 19 matches looked to have sealed a vital win for Burton, only for Assombalonga to level in the 90th minute.

Middlesbrough’s late equaliser kept Burton bottom of the table, but Albion were able to draw level on points with Sunderland, who lost out 3-1 at home to Sheffield Wednesday.

Lucas Joao, Tom Lees and Atdhe Nuhui all hit the net for Wednesday, with Sunderland only able to reply through George Honeyman.

Bristol City missed out on the chance to jump ahead of Middlesbrough and into the playoff berths, with substitute Neal Maupay’s late strike stealing Brentford a 1-0 win on the road.

Galwayman Ryan Manning put through his own net and then made amends with QPR’s fourth goal as the west Londoners thumped Norwich 4-1 at Loftus Road.

Massimo Luongo, Matt Smith and Eberechi Eze were all also on target for the hosts, who fell behind thanks to Manning’s own goal, before taking full control.

Martyn Waghorn hit two goals in as many minutes as Ipswich drew 2-2 at home with Millwall, who had Jake Cooper and George Saville on target.

Tom Lawrence fired a free-kick to guide Derby to a 1-0 win over Preston, as the Rams ended an eight-game winless streak.

Irish international Alan Browne missed a first-half penalty as Preston squandered the chance to leapfrog Derby and go into the playoff places.

Nottingham Forest’s home clash with Barnsley was postponed due to a waterlogged City Ground pitch.