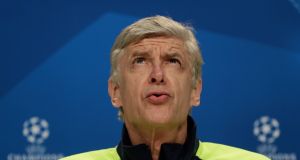 Groundhog Day, besides being an overrated comedy starring Bill Murray, is the most famous act of rodent meteorology in the world. Dependent on the behaviour of a solitary member of the marmot family, residents of the US state of Pennsylvania hope to divine whether their spring will be early or late. If the groundhog emerges from its burrow and the skies are cloudy, spring will be early. If the sun is out, however, then spring will be late as the hog will retreat to its hole, frightened by its own shadow.

So when pundits say Bayern Munich versus Arsenal in the Champions League is groundhog day, it works on more than one level. Yes, it is a fixture that has been played out six times in the past five seasons, but also it provides (yet another) test of Arsenal’s mental character. Will they emerge confidently or take fright at their own shadow? Experience certainly suggests one outcome over the other but hope springs eternal.

Arsenal go into the match with relatively few injury concerns bar the damaging and ongoing absence of Santi Cazorla from midfield. Arsène Wenger’s biggest selection dilemma in the build-up to the match was over whether to stick with David Ospina, who has played in goal for all of the Gunners’ Champions League fixtures to date, or switch to his regular first-choice, Peter Cech, who has fallen from his usual high standards of late. The Frenchman confirmed on Tuesday he will stick with Ospina.

It is a risky choice but, regardless, there is reason to accept the verdict of Bayern’s Arjen Robben when he says that Arsenal’s squad has “improved again” since the last time the sides met and that this encounter is “going to be the most difficult one” for the Bavarians.

When the two clubs began their recent run of fixtures, at the Emirates Stadium in the first leg of the round of 16 in 2013, Arsenal were a noticeably different side. For a start there was no Cech to deliberate over as he was still at Chelsea.

The erratic Wojciech Szczesny was in goal and Lukas Podolski started the match up front. Bayern duly tore into a two-goal lead within 21 minutes thanks to a Toni Kroos volley and a tap-in for Thomas Müller after Szczesny spilled a header. Podolski pulled one back after half-time and Wenger soon brought Olivier Giroud off the bench in the hope of rescuing a draw. But a bobbling Mario Mandzukic shot beat Szczesny once again and the tie was thought to be as good as over.

What followed in Munich was the first of what came to be a new Arsenal theme: a proud second-leg victory in the course of overall defeat in the tie.

Szczesny and Podolski were replaced by Lukasz Fabianski and Giroud and the Frenchman opened the scoring in the third minute. The Polish goalkeeper also played a blinder, keeping out various Bayern efforts, but a Laurent Koscielny header with five minutes remaining came too late for the Gunners.

The sides met at the same stage the following season. Again the home leg was a crushing disappointment. Wenger had added Mesut Özil to his squad and the German started the match on fire, winning himself a penalty in the ninth minute. But a more anaemic spot kick one would not wish to see and Manuel Neuer saved it with ease.

From that point the pendulum swung to Bayern. Kieran Gibbs went off injured as half-time approached, Szczesny fouled Robben to concede a penalty and earn himself a red card. The German club also missed their spot kick but no matter. In a second half in which they had 88 per cent possession Bayern scored twice, the first a beautiful strike from Kroos, the second another peach from Muller.

The return leg was a dead rubber of an affair, though Podolski managed to score against his old side in a 1-1 draw.

Last season the teams met once again, this time in the group stage, and, fired up to avenge what had gone before, Arsenal won the fixture in north London 2-0.

Late goals from Giroud and then Özil in stoppage time gave the result a convincing look but in truth the Gunners had spent much of the match camped on the edge of their box holding firm against endless waves of Pep Guardiola-inspired Bayern possession.

Cech, now in Arsenal colours and called into the side at the expense of Ospina, who had made mistakes in earlier matches, was man of the match.

When Arsenal travelled to the Allianz Arena missing both Laurent Koscielny and Hector Bellerín from their defence, few thought they could repeat the performance. In the event the Gunners endured a record-equalling defeat, losing 5-1, with Müller bagging a brace.

That is the history Arsenal have to overturn if they are to break the groundhogday cycle. But their best performances have come when they have put fear to one side. The shadow of the past hangs over them. They need to make sure not to jump at the sight of it. Guardian service