Jim McGuinness joins ‘Green Invasion’, but who are Beijing Guoan?

With a new coaching team in place, the next step for Beijing Guoan is some big signings 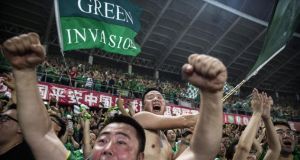 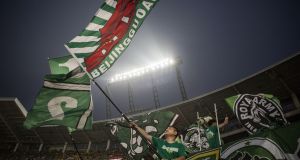 Although Jim McGuinness’s new club Beijing Guoan have not yet splashed the big cash on players like Jackson Martinez and Oscar, there is a feeling that they are on the brink of something big.

The appointment of former Bayer Leverkusen coach Roger Schmidt to the Chinese Super League side, with McGuinness as his deputy, shows there is ambition there and the next step for the team from the capital, known for being perennial underperformers, has to be some marquee signings.

In their statement announcing Schmidt’s arrival, Beijing Guoan said: “We are convinced that Schmidt will give a new impetus to Beijing Guoan and will lead our team to reach new heights.”

The 44-year-old McGuinness has a two-and-a-half year contract at Guoan (the club is generally referred to simply as Guoan) and arrives in China on Saturday.

Formerly Beijing United, the club was renamed Beijing Guoan. “Guoan” translates as “national security” – an unusual, indeed possibly unique, name for a club. They have won the Chinese Super League just once, in 2009 and they were runners-up in 2014.

The team is currently called Beijing Sinobo Guoan, after the property company Sinobo bought a 64 per cent stake last December, but people in Beijing rarely use “Sinobo”.

The fans in their distinctive green livery – green symbolises growth and benevolence in China – are more likely to describe something as “niubi”, a huge chant among the fans usually, though not always, used disapprovingly and is basically a reference to a cow’s vagina.

As they roar, a row of People’s Armed Police surrounds the pitch, watching the crowd for signs of trouble.

Green is also a symbol of patience, something of which Beijing Guoan fans have a lot of, as they have plenty of experience of disappointment.

Matches are played in the Workers Stadium, built at the height of Mao Zedong’s reign in 1959 and known simply as Gongti, which seats 66,000 although this is difficult to fill, even in Beijing with its population of 23 million.

Generally sections are closed off for Guoan games, but they still attract an average attendance of 40,000 and the support is vocal. That said, when things are not going well fans have been known to tear up the seating and hurl seats onto the pitch.

The standout players at Guoan include the Turkish striker Burak Yilmaz, as well as Brazil international Renato Augusto and Spanish striker Jonathan Soriano.

Earlier this month, Yilmaz was sent off for fighting during a match against Fabio Capello’s Jiangsu Suning. The Chinese Super League is prone to violence – Shanghai SIPG’s Brazilian international Oscar was recently banned for eight games in June after he started a mass brawl.

This kind of commitment has made Yilmaz extremely popular among the fans. During a recent home match against Guangzhou, with Beijing trailing 2-0, he berated a ball boy for being too slow giving the ball to the opposing team’s keeper and allowing him to waste time.

His exhortations to the team to keep fighting paid off and Beijing managed to come back and draw.

The most famous match in Guoan’s history took place in 1997, when they beat arch-rivals Shanghai Shenhua 9-1 at the Workers Stadium. Games between the two are known as the China Derby and there is also intense rivalry with Tianjin Teda (the Jing-Jin Derby) as both teams were previously amalgamated into one club.

Founded in 1951, the team was initially known as North China FC, having gathered the best players from Beijing and Tianjin. Football was banned during the early part of the period of communist ideological frenzy known as the Cultural Revolution (1966-76) but Guoan became reasonably successful after the sport was restored and won the league in 1973.

Having won eight titles under the old name, Beijing Guoan became part of the reform of the game by the Chinese Football Association in 1992, which sought to professionalise the league.

Initially, the league has had a difficult few years struggling with corruption, bribery and match-fixing commonplace. Under president Xi Jinping, a passionate football fan, there has been a major clean-up which has seen senior Chinese Football Association officials jailed while the “black whistles”, as corrupt refs are known, also saw prison time.

Previous foreign managers at the club include Serbian Milovan Doric and Ljupko Petrovic. In recent years, their biggest success was winning the championship in 2009 under former Beijing player Hong Yuanshuo. The devoted fans will be hoping that Schmidt, and McGuinness can bring some of that success back to the Workers Stadium.