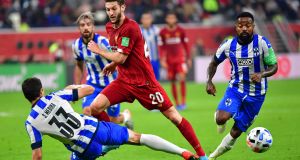 Liverpool midfielder Adam Lallana in action against Monterrey. “We are going to give it our all. It’s like an addiction: you win one medal and you want to win more.” Photograph: Giuseppe Cacace/AFP/Getty

Adam Lallana has called the pursuit of trophies an addiction for Liverpool and the chance to win the Club World Cup for the first time a huge incentive for Jürgen Klopp’s team.

The European champions face Flamengo of Brazil in tomorrow’s final having overcome the Concacaf champions, Monterrey, in a hard-fought semi-final. Roberto Firmino’s stoppage-time winner was the sixth goal Liverpool have scored in the 90th minute or later this season and, according to Lallana, testament to the attitude and resourcefulness of the unbeaten Premier League leaders.

“We had Hendo [Jordan Henderson] at centre-half and I thought he was magnificent,” the midfielder said. “That is all part of the character and the mentality and why we keep churning out late winners. It’s as simple as that.”

Liverpool sacrificed their chances of winning the Carabao Cup to bring their strongest available squad to Qatar, with a youth team losing 5-0 at Aston Villa in the quarter-finals less than 24 hours before Wednesday’s win over Monterrey.

However, Lallana insisted the opportunity to add the Club World Cup to the Champions League and Uefa Super Cup more than compensates for the domestic difficulties it has created.

“It’s massive,” he said. “We are European champions and to be world club champions as well – there’s not many people who can say that. We are going to give it our all. It’s like an addiction: you win one medal and you want to win more.”

Liverpool lost to a Flamengo team featuring Zico and Júnior in the 1981 Intercontinental Cup – the first of three final defeats in the tournament for the club – and Lallana expects another testing occasion against a side who have had several uninterrupted weeks to prepare for the tournament.

“It will be a very tough game,” he said. “I’m sure Bobby [Firmino] and Alisson will give us some inside info into them. We watched them the other day. They were very dynamic, very aggressive, physical, and we will have to recover quickly. Another trophy is up for grabs so bring it on. It’s all about recovery now. It’s a good job it didn’t go to extra time. We will get in the ice baths, get the massages and all guns blazing for Saturday.”

Despite the luxury of bringing Firmino, Sadio Mané and Trent Alexander-Arnold off the bench to decide the semi-final, Klopp’s options in defence were severely limited with Virgil van Dijk missing through illness.

The influential centre-half did some fitness work yesterday but not a proper training session and is being monitored. Henderson, who stepped into the void in the absence of Dejan Lovren, Joël Matip and Fabinho, said he would happily play there for only the second time if it helps Liverpool claim their third trophy of the year.

“That was different,” the Liverpool captain joked of his central defensive performance against Monterrey.

“I had fantastic players around me and they helped me out. I’ve played at full-back but I’ve never played there before. I just tried to do my best for the team and thankfully we got the win. I don’t know what will happen with Virgil on Saturday. Fingers crossed he will be okay. Of course, if the manager needed me to go there again, I would do it.

“We wanted to get to the final and we want to win. We have done the first bit and now we want to win it. That’s the mentality of this team.”- Guardian