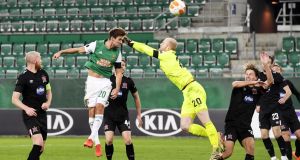 There is plenty of business for Dundalk to attend to between now and November 26th when these two sides meet again but Filippo Giovagnoli left Vienna on Thursday night convinced that his side can genuinely live with the quality of opposition they are encountering in this Europa League group. The problem now is to deliver on the more promising aspects of the performances so far when things are a little bit less hectic at home.

“It was a great performance tonight,” said the Italian. “The team performed and deserved much more than what happened at the end but now we know we can compete. This is important for us. Unfortunately the result was not good for us but we are looking to the future, to the other games with more positivity.

“We came here to perform, to play without fear [and for a while] it was a complete performance. Then we committed some mistakes and as we know in Europe if you commit mistakes then you get punished. But the performance as a whole was great. Just after we scored to make it 2-2, Greg Sloggett had a great opportunity but the ball went out by an inch. That could have been 3-2 but sometimes you need a little bit of luck. So tonight wasn’t our night but I am proud of the performance and I am looking forward to the other games now.”

In this one, Dundalk became the first Irish team in 15 group games to score three times. The achievement is somewhat wasted, of course, when you let four in and the manager suggested that he would need to review the game before passing judgment on what went wrong on the defensive side of things.

He suggested that the vast difference in resources, though, had likely played its part as well.

Still, as Aaron McCarey stood and stared into space prior to picking the ball out of his net following the third, it was clear he knew he had some blame to shoulder though he wasn’t the only one. The Dundalk defence rode its luck at times against opponents who proved better at creating chances than converting them. Had Chris Shields not been outstanding there surely would have been more.

The pity of it is that Dundalk caused the home side plenty of problems too. Pat Hoban gave them the lead just seven minutes in when he headed a curling Shields ball home and Michael Duffy should have scored after a wonderful through ball by Jordan Flores.

Quite a few of both sides’ chances came from set pieces with neither, it seemed, up for defending them well. Long before Sloggett had narrowly missed the target from a second-half corner, Seán Gannon had passed up the opportunity to get onto the end of one that Seán Hoare had flicked into open space at the far post.

It was endlessly entertaining stuff even if the home side’s coach was finding it difficult to watch at times.

The hosts got their equaliser from a long-range Dejan Ljubicic effort that McCarey should really have got a hand to but he had better moments as Dundalk survived a good deal of second-half pressure. Eventually, though, they were opened up and when Kelvin Arase headed home with 12 minutes remaining, that seemed likely to be that.

Giovagnoli’s changes breathed fresh life into his side, though and Nathan Oduwa made a particular impact. His run from midfield created the threat that led to Dundalk’s first penalty and he won the second himself. David McMillan coolly put both of them away.

When he pulled his side level with the first, anything seemed possible but by the time he scored the second, the game was all but over with Max Hofmann getting away his marker too easily and to the ball before McCarey who had come but failed to connect.

The fourth was the sort of thing that happens when a team chases a goal late on, with 17-year-old Yusuf Demir rounding off an impressive display with a decent finish to score on the break and though they never gave up on the draw, Dundalk had given themselves too much to do in the closing minutes.

“These games take a bit more out of you,” admitted McMillan afterwards. “You’re coming away here and you’re probably covering more distance, making more runs, at a higher tempo so they take a lot out of the players but they are also a great experience for us.

“That’s why we have to make sure that we are in the position for next year to have the opportunity to play in Europe. I think it’s everybody’s main focus. We had hoped to do that over the last couple of weeks but we haven’t so we have to do it on Monday and I’m sure we will.”