But significant obstacles remain in relation to Shelbourne and Tolka Park 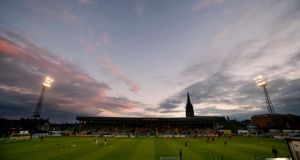 Dublin City Council says it remains committed to completing a deal that would result in Bohemians and Shelbourne sharing Dalymount Park while Tolka Park is redeveloped for non-footballing use.

But its assistant chief executive, Brendan Kenny, says that after 18 months of talks, it is up to the two clubs to resolve the outstanding issues and deliver ownership of their stadiums if they want to proceed.

Kenny suggests the more significant obstacles still to be overcome are in relation to Shelbourne and Tolka Park which is, somewhat ironically, ultimately owned by the council itself.

In 1967, it granted a 99-year lease (backdated to 1963) to Drumcondra FC which subsequently changed hands a number of times. It is now effectively controlled by the property developer Jerry O’Reilly who is said to be sympathetic to the idea of facilitating the overall deal. It appears, however, that his involvement with Nama means he may not have an entirely free hand in the matter and there appears to be something of an impasse between DCC and the club over how to proceed.

“If the club has some influence on Jerry O’Reilly; he is a good footballing man and . . . I think he’s being reasonable on it but it’s still up to them to come back to us and say, ‘here’s the lease’.”

The bottom line, he says, is that: “We’re still willing to become the owners of Dalymount Park and we’re willing to establish something along the lines of South Dublin and Tallaght where we could facilitate both clubs there. But it’s really up to both clubs to clear the obstacles.

“I’ve been talking to Shels; I’ve only met the board in the last week or so and I made it clear to them that the time was running out but that whenever they want to come and talk to us with some sort of solution or proposal then we’ll be willing to talk to them but it really has to come from them. It’s up to them to make sure that the scenario is right for us to come in and intervene.”

There appears to be some surprise at Shelbourne that the council views the ball as being in their court with some of those connected with the club having believed that a deal would have to be done directly between DCC and O’Reilly.

The club has not got the resources required to influence O’Reilly and while Kenny suggests that the council would only be prepared to pay the sort of money that might be regarded as “a gesture” in order to facilitate a deal (which, he says, is absolutely essential to the overall project), those at the club contend they could never be in position to commit even the smallest amount of public funds and so it makes little sense for them to front up any negotiations.

Bohemians are believed to be very close to being in a position to deliver at their end although here too there is some uncertainty over the terms of a transfer. Kenny confirms that a provisional price of just short of €3.5 million has been agreed with the club for the purchase of Dalymount Park and it is believed that this is very much in line with the amount committed to settle Bohemians’ debt to Zurich.

Around the club, however, there is a belief on the part of some that the council will also help to fund a deal with those members who previously loaned around €750,000 to it. As they too have a charge on the ground some sort of agreement would be necessary. When this was put to him, Kenny denied that DCC will become involved in paying off debts but acknowledged there is some flexibility on the purchase price.

“We want to buy Dalymount Park and pay a reasonable price for it; if that price pays all the debts, then fine.”

Ultimately, despite the various complications, all parties appear to believe the deal will ultimately be done although Kenny accepts that not everyone amongst the two clubs’ supporters will be happy to see it completed.

The new facility could also include a museum celebrating the history of the Irish game and Dalymount’s part in it.