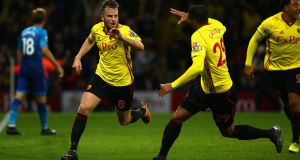 Tom Cleverley hit a last-gasp winner as Watford came from behind to beat Arsenal and check the Gunners recent run of form.

The former Manchester United man lashed home in stoppage time after the visitors were unable to clear their lines to give the Hornets a first Premier League home win of the campaign and move them up to fourth spot in the Premier League table.

Per Mertesacker had headed Arsenal ahead with his first league goal in 1400 days, only for a contentious Troy Deeney penalty to draw Watford level before Cleverley’s late heroics sealed a memorable 2-1 victory.

Arsene Wenger’s side – who started without either Mesut Özil or Alexis Sanchez – had won their last four games in all competitions following a slow start but they were poor for much of the contest.

A point would have seen Arsenal leapfrog Chelsea into fourth but it was Marco Silva who was instead left toasting a place in the top four.

Wenger made four changes as Mertesacker and Laurent Koscielny came into the back three, with Shkodran Mustafi injured on international duty and Rob Holding named as a substitute.

Both Aaron Ramsey and Sanchez were left out completely due to fatigue, with Özil only named on a strong Arsenal bench.

Roberto Pereyra, playing for the first time since suffering an injury in the opening day draw with Liverpool, had the game’s first decent chance but headed well wide.

Arsenal were struggling to create any openings and Mohamed Elneny’s long-range effort over the crossbar was their best opportunity of the opening 30 minutes.

The opener came soon after as Mertesacker rose to head home Granit Xhaka’s corner from six yards out, marking his first league start in almost 18 months with a rare goal.

Xhaka then forced a smart stop from Heurelho Gomes before Hector Bellerin turned a good chance wide of the post as Arsenal looked to add a second before the break.

Richarlison curled an effort wide for Watford early in the second half before Özil was introduced off the bench in place of a limping Danny Welbeck.

The Germany international was straight into the action, sliding a pass into Alex Iwobi, whose shot was well saved by Gomes.

Gomes was again on hand to prevent Özil adding a second, Iwobi returning the favour with a through ball before the substitute hit straight at the former Tottenham goalkeeper.

Watford went straight down the other end and equalised as Bellerin was deemed to have fouled Richarlison in the box, with referee Neil Swarbrick showing no hesitation in pointing to the spot.

The hosts’ own substitute Deeney stepped up to slam the ball past Petr Cech for his first goal of the campaign and set up a grandstand finish to what had been a largely forgettable encounter.

Another Hornets substitute, Etienne Capoue, almost scored as his shot took a huge deflection off Mertesacker before hitting in the post.

The winner would come in the dying stages as Arsenal, with their backs to the wall, could not clear a bouncing ball which eventually fell to Cleverley to slam home.