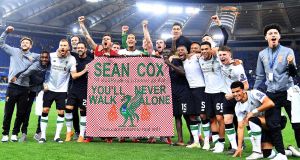 Is it too presumptuous, when Liverpool are playing with this kind of attacking conviction, to believe they have the riches to prevent Real Madrid, the most successful team in the history of the European Cup final, from registering a 13th success in the competition they cherish the most? The final will be on May 26th in Kiev and Liverpool, on this evidence, will be going to Ukraine to score goals and examine the theory that Madrid can be susceptible at the back.

Evidently they will need to tighten up their own defence, eliminate the mistakes that briefly threatened a late twist here and hope their goalkeeper, Loris Karius, is not having one of his accident-prone performances.

Jürgen Klopp’s team have now accumulated 46 goals, qualifiers included, in this competition and Sadio Mané, Mohamed Salah and Roberto Firmino have 31 of them. True, they will need to find a way to subdue Cristiano Ronaldo et al but if there is one certainty about this Liverpool side it is that they will attack with vigour and confidence.

That approach was too much, ultimately, for Roma and, though it was a night of high drama in the Italian capital, it was only in the last five minutes that Radja Nainggolan’s two goals meant Liverpool’s aggregate lead was down to one. Roma gave everything and Liverpool had to withstand some spirited pressure. By then, however, Klopp’s men had inflicted grievous damage because of the first-half goals from Mané and Georginio Wijnaldum on top of the 5-2 victory at Anfield last week.

To put it in perspective, this was the 22nd time Liverpool had led by three goals or more from the first leg of a Champions League tie. The lesson of history is they had never surrendered that kind of position of strength. Yet Roma had already overturned a 4-1 deficit against Barcelona in the quarter-finals and the Giallorossi had a raucous, impassioned crowd willing them to repeat the trick.

Anfield was special for the first leg. The Stadio Olimpico, a seething, whistling pit of bias, somehow managed to make even more of a racket. Of all the places Liverpool have been in this competition, all the stories they have accumulated over the years, have they ever experienced such a febrile din?

A lesser team might have wilted. That, however, was the most impressive part of Liverpool’s performance: their fearlessness.

Roma’s record of having not conceded a single home goal in this competition – some achievement when their opponents have included Barcelona, Chelsea and Atlético Madrid – was gone within eight minutes.

Liverpool began the game like a team in a hurry, not showing a flicker of apprehension, and had reasonable claims for a penalty either side of Mané’s goal. Kostas Manolas was fortunate to get away with his shove on Mané and even luckier, at 1-0, not to be punished for clattering Wijnaldum just inside the penalty area.

Even when James Milner’s misfortune offered Roma a brief strand of hope, Liverpool were never tempted to play with more restraint. Another side might have tried to take the sting out of the game. Liverpool, on the other hand, refused to sit back and it was typical of the team’s attacking ambitions that the corner for their second goal originated from a move started by their left back Andy Robertson surging down the line. Roma could not clear Milner’s corner and when Edin Dzeko inadvertently headed the ball the wrong way, under pressure from Virgil van Dijk, it was too good an opportunity for Wijnaldum to pass up, heading in from close range.

Roma, to give them their due, kept attacking, desperately trying to change the complexion of the evening, but they were in need of a football miracle and Liverpool had shown with the opening goal how devastating they could be on the break. Roma were vulnerable as soon as Nainggolan played the ball straight to Firmino. Mané was running to the left, Salah was going the other way, and Roma had only three defenders back. Mané took a touch to control Firmino’s pass and fired emphatically past Alisson, the home team’s goalkeeper.

Perhaps the second half would have been a little hairier for Liverpool if Stephan El Shaarawy’s 35th-minute shot had crept in rather than thudding against Karius’s post. Again Milner was involved, with the shot taking a hefty deflection off the midfielder. This time, however, Milner’s luck was in – in stark contrast to the freakish set of events, a quarter of an hour in, when Dejan Lovren tried to hack away El Shaarawy’s knockdown inside Liverpool’s penalty area only to whack the ball against Milner’s head and see it zigzag into the net.

Roma began the second half knowing they needed four more goals, with none in reply, just to take the game to extra-time. At least they had a go and Dzeko, wrongly flagged offside, should have been awarded a penalty five minutes after the restart when he went down under Karius’s challenge.

Two minutes later Karius turned El Shaarawy’s shot into Dzeko’s path and when the former Manchester City striker swept in the rebound it set up another flurry of Roma pressure. Dzeko had a splendid game, barring the mistake for Wijnaldum’s goal, and Liverpool were also fortunate in that period to avoid a penalty from Trent Alexander-Arnold’s handball that blocked El Shaarawy’s shot.

Naingollan’s goal went in off the post, with Karius badly caught out, and when the same player scored a penalty on the back of the substitute Ragnar Klavan’s handball it turned out to be the last Roma touch of the night. – Guardian service