Veteran targeting a final Champions League medal before he retires 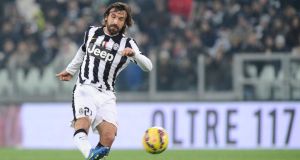 Juventus playmaker Andrea Pirlo hopes this could be the season they finally re-establish themselves on the European stage as he dreams of winning the Champions League again before he retires.

Juve’s maestro has been helping steer them towards a fourth successive Italian title, yet the gulf between a fading Serie A and the Champions League is so great that they are not seen as a major threat to Real Madrid, Barcelona or Bayern Munich.

Juve were comprehensively outclassed by Munich in the quarter-finals two seasons ago and failed to make it beyond the group stage last term.

With Paul Pogba and Carlos Tevez attracting interest from abroad, and 37-year-old goalkeeper Gianluigi Buffon still agile, this campaign could be the last real chance of European glory for the current team as they prepare to host Borussia Dortmund.

At the heart of their challenge is Pirlo, who will be 36 when this year’s final comes around but who continues to work wonders as his breathtaking winner against Atalanta on Friday demonstrated.

“I came to Juve in order to win and we achieved that,” said Pirlo, who won the Champions League twice with AC Milan.

“I am very happy about that but now we must take the next step up the ladder. I’d like to win another Champions League before retiring.”

The first meeting between Juve and Dortmund since the 1997 Champions League final, which the Germans won 3-1, now provides the acid test for the Italian champions.

Although Juergen Klopp’s side have struggled in the Bundesliga, their European form has been excellent as they sailed through their group by winning their opening four games.