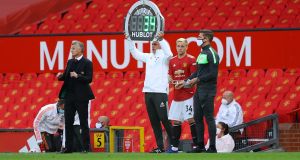 Ole Gunnar Solskjær offered a barbed response to pundits who have criticised Donny van de Beek’s lack of playing time for Manchester United, stating it is nice for them to have “a little go”.

The manager has not started the midfielder in United’s opening four Premier League games, Van de Beek having signed for €39 million from Ajax. The 23-year-old has, though, featured in seven of United’s eight matches in all competitions, starting two EFL Cup ties – Saturday’s 0-0 draw with Chelsea being the first time he has not been used.

The Sky Sports pundit Gary Neville, Solskjær’s former United team-mate, said it was a mystery how Van de Beek had played so little in the league – 59 minutes. Patrice Evra, another former United player, said the Netherlands international was in the stands because the side “does not need him”. Marco van Basten, the Dutchman’s compatriot and former Ajax striker, said Van de Beek joining United was a bad move.

Solskjær was asked whether it was a surprise Van de Beek has not been more involved. “When Donny has played, he’s played really well,” he said. “It says a lot about our depth of quality that we don’t have to use him every single game.

“I also think it says everything about our ambitions – we want to push on, we want to challenge for trophies this season. Donny is going to play a big part. I realise the topic is Donny van de Beek and it’s nice for some [former] players or commentators to have a little go. I know you’re short for time when you’re on telly and you have to put your points across very quickly, but you have to know that you don’t have to start the first [league] games to be a very important player in the squad.”

Solskjær referred to his United career when he was often used as an impact striker to great effect. “I’d be disappointed if some of my team-mates said that I wasn’t important at Man United but I didn’t start many games,” he said. “So Donny’s going to be very, very important for us.”

“It’s going to be a long season,” he said. “To leave players out like for the last game – Donny, Nemanja and Paul started on the bench – they are all experienced international footballers: it’s not easy. But I don’t feel that pressure. The pressure is on getting results and picking a team that we think is going to win the next game and even planning the next two, three, four games because we need to win more than one game.”

Solskjær said: “Julian always wants to be dominant, so we prepare for a difficult game against a difficult team that can play in many different ways.”

United have been linked to Leipzig’s defender Dayot Upamecano. “I’ve always tried to respect players of other teams but since he’s playing against us I know he’s a very good player, so we can see him close up,” Solskjaer said.

The manager said he has a couple of doubts for the match but did not identify the players in question. – Guardian