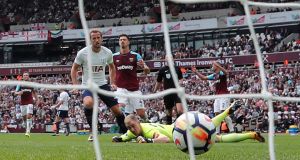 Slaven Bilic knows how it goes in his line of work. Once a manager is in danger, once the narrative becomes entrenched, it can begin to feel like the long kiss goodbye.

“Once that’s opened, then it basically doesn’t stop,” the West Ham manager said after his team’s 3-2 home defeat against Tottenham Hotspur on Saturday. “Game by game or two games by two games – it’s the way it is in modern football. Once you open that page . . . ”

Bilic turned that page last season, when only a 1-0 win against Spurs with three games to go persuaded the West Ham hierarchy to stick with him. But three successive Premier League defeats at the start of this season ensured that the mention of his name were prefaced by words like “under-fire” and “beleaguered”.

In these situations, positive results like the win against Huddersfield Town and the draw at West Bromwich Albion trigger relief and respite. But the dark clouds never truly disperse and they rolled back over Bilic during a loss to the club that West Ham fans most love to hate.

The final scoreline looked tight but this was an afternoon in which Bilic and his team flirted with humiliation. When Harry Kane rattled a post on 63 minutes Tottenham were 3-0 up and rampant, looking threatening every time they came forward.

Kane had already scored two to make it six in four games for him, the outstanding Christian Eriksen had the other one and Dele Alli was having his best game of the season. The interplay between that trio was beautiful to watch.

At that point, the inquest into West Ham’s performance had begun. Bilic’s game plan worked well for the opening half-hour; his team had denied Spurs space between the lines, they were getting in their opponents’ faces and they had exploited the high positions of the Tottenham wing-backs to work a couple of promising three on three situations.

The way that they fell apart after Kane’s opener was worrying and Bilic had to carry the can for that. When Michail Antonio went off injured in the 28th minute his decision to introduce Andy Carroll, rather than André Ayew or Diafra Sakho, represented a tearing up of the initial approach.

A manager cannot legislate for the sort of reckless passing error that Carroll made for Kane’s first goal. But with Carroll on as the No9 and Javier Hernández pressed out wide into Antonio’s position, West Ham lost their ability to get behind the Spurs defence; to stretch and harry them. Consequently, Jan Vertonghen was emboldened to squeeze up on Carroll, which led to him nicking the ball off the striker to set in motion the move for Kane’s second goal.

With Mousa Dembélé out injured, the Tottenham manager switched to a 3-5-1-1 system which got a good performance out of Moussa Sissoko on the right of the central midfield trio. From the half-hour mark, Eriksen started to drift forward into space, which was hugely dangerous.

“The second goal is more our sloppiness or giving up for five minutes than their brilliance,” Bilic said, which sounded like quite the indictment on him and his team.

The complexion of the game would change sharply in the final quarter, when Bilic could cling to a clutch of positives. West Ham did not give up. They restored a measure of pride with the goals from Hernández and Cheikhou Kouyaté. And the home crowd stayed with them. Crucially, Bilic appears to retain the backing not only of his players but also the fans.

West Ham’s comeback was influenced by the red card that Tottenham’s summer signing Serge Aurier received in the 70th minute. The right wing-back is nothing if not a risk-taker and having been booked, it was a foolish decision to jump into a tackle on Carroll.

After the red card, Pochettino could be seen in conversation with Hernández, with the West Ham striker seeming to suggest that Aurier was crazy.

Pochettino did not criticise Aurier, however great the temptation might have been. “I was a player and if you look on Google, you can find many, many mistakes from me,” he said.

In the end it was Bilic’s errors that came under the spotlight. He is into the final year of his contract and that is another factor that frames his situation.

“I don’t think about that, I’m not illegal,” Bilic said with a smile. “Pressure is a part of my job.”

It will be turned up on Saturday for the home game against Swansea City.