‘There is a lot of news about five, six, seven goalkeepers that we want to buy but it’s not true’ 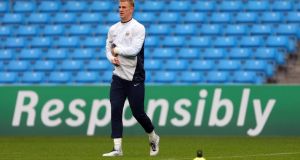 Joe Hart has “no chance” of going out on loan in January even if he is still not re-established as Manchester City’s number one, Manuel Pellegrini has stated, with the City manager also refusing to say whether a good performance against Viktoria Plzen tonight could force him back into the first team for Sunday’s visit of Swansea City.

Pellegrini will select Hart for this evening’s Champions League group match at the Etihad Stadium for the first time in a month, with the goalkeeper’s last appearance coming in the 2-1 defeat at Chelsea on October 27th. The 26-year-old is being recalled as the match is a dead rubber. City’s passage to the knockout phase is sealed and there is only an outside chance of them overhauling Bayern Munich at the top of the group.

Roy Hodgson is keen for Hart to fight his way back into City’s starting line-up. Yet even if Hart nears the winter transfer window still out of favour and feels he needs a temporary move, Pellegrini will not allow him to leave.

“There is no chance for Joe Hart to go out from this squad in January,” he said. “There is a lot of news about five, six, seven goalkeepers that we want to buy but it’s not true. Of course he stays.”

Impressed Pellegrini
Hart has reportedly impressed Pellegrini in training during his time out, so a fine display against Plzen, whom City beat 3-0 in the away game and are bottom with no points, could force a recall for the Swansea game.

“That’s a question for next Saturday,” said the manager. “On Wednesday he will start then the next game we’ll talk about who will start playing. The important thing for Joe is he will play on Wednesday and we hope he will have a very good performance.”

Samir Nasri, meanwhile, has been among City’s standout performers this campaign following his uneven form last season, during which Pellegrini’s predecessor, Roberto Mancini, became exasperated with him. Nasri admits that an argument with a French journalist in the aftermath of France’s exit from Euro 2012 was partly responsible for his poor displays at club level.

Soul searching
Nasri was troubled enough to refuse to speak about his problems to his parents and agent. But after a summer of soul searching the playmaker decided to turn his approach around.

“In my head I wasn’t the same. I didn’t play well for City and lost my spot in the squad and at the end of the year, you look at your season and you realise I was not myself. I now talk to the people – keeping things to yourself is never good. So I talked to the people I love and I decided to smile and be happy and do what I do best. Playing football and that is it.”

Vincent Kompany, who has trained with the squad for the first time since suffering a thigh injury in the victory over Everton in October, will not feature against Plzen.

“He started this week working with the whole squad. He is working with the physio. I think next week he will be fit to play. But not on Wednesday,” said the manager, who is also without three other first-team squad members. “I think Jovetic, Silva and Rodwell need another week or 10 days more to be fit. They will not be involved on Wednesday.”
Guardian Service