Liverpool into quarter-finals after Porto stalemate

Portugese side never threaten to claw back five goal deficit 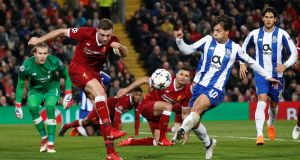 In truth Liverpool booked their place in the Champions League quarter-finals three weeks ago in Porto but the formality of their advance at Anfield does not lessen the achievement. Jürgen Klopp’s team enjoyed the fruits of their ruthless display in Portugal as they marched on in Europe with a minimum of fuss.

It is rare to witness a last-16 second leg pass without incident, excitement and goalmouth action but that was the story of a goalless encounter at Anfield. Not that Liverpool will complain. The responsibility was on the Portuguese league leaders to correct a 5-0 humbling on home soil and, thanks to a professional job by Klopp’s team, they never looked likely to become the first team to overturn a five-goal first leg deficit in the Champions League.

The second leg was enlivened only after Mohamed Salah’s late introduction but, aside from a spectacular save from fellow substitute Danny Ings, the goalkeeping legend Iker Casillas was barely troubled on what may prove his farewell to Europe’s elite competition. Liverpool will be hanging around for some time yet on current form. This was more a test of their mentality than ability according to Klopp and it was one they passed with ease.

The strength of Liverpool’s squad enabled Klopp to take few risks with his lineup while still making five changes to the team that beat Newcastle in the Premier League on Saturday. Virgil van Dijk and 32-goal Salah were rested on the bench and Andrew Robertson absent completely, but it was an experienced Liverpool side deployed by the manager to preserve a comfortable advantage. At a crucial stage in the campaign, maintaining a formidable rhythm and a winning mentality were also on Klopp’s agenda.

His selection was conservative compared with that of Sérgio Conceição. The Porto coach made 10 changes to the team that suffered the heaviest home defeat in the club’s European history three weeks ago – a rich history covering 56 seasons – with Casillas returning to extend his Champions League appearance record to 171 games. Casillas played in Real Madrid’s 3-0 victory here in 2014, when the Spanish giants dismantled Brendan Rodgers’ team with three goals before half-time, but his prospects of witnessing a repeat were quickly revealed to be non-existent as Liverpool controlled the first half.

Porto were more disciplined and united than at Estádio do Dragão and almost capitalised twice with long balls over Liverpool’s central defence. The fit-again Vincent Aboubakar and Majeed Waris just failed to connect on both occasions while a misplaced pass from Bruno Costa, when the visitors out-numbered the hosts on a counterattack, sparked a furious response from Conceição. Professional pride was at stake for the Portuguese league leaders, roared on by an impressive travelling support. Impressive in numbers, at least – the failure of a few individuals in the Porto section to honour a minute’s silence for Davide Astori, the late Fiorentina captain, brought understandable condemnation from the home crowd.

The commitment of both teams and managers to victory was undeniable but so was the sense of a dead-rubber. In a first half short on incident it was Sadio Mané who had the clearest opportunities to inflate Liverpool’s aggregate score. His first chance arrived from an inviting right-wing cross by Joe Gomez after Óliver Torres had invited trouble, his careless crossfield pass going straight to a red shirt. Mané met the delivery with an acrobatic stretch but his volley sailed just over Casillas’ crossbar from close range. His second, a snap-shot from the right of the penalty area, beat the World Cup winner only to rebound to safety off the inside of the far post. Dejan Lovren also went close with a header from James Milner’s free-kick as Liverpool finished the first half comfortably on top.

Casillas was given a warm ovation by the Kop when he re-emerged for the second half. His first came in September 1999 when then-Real Madrid coach and former Liverpool striker John Toshack handed the 18-year-old a European debut at Olympiacos. A fact to make you feel old.

But it was the Liverpool keeper, Loris Karius, who made the first save of the night, when Waris shot low to his right moments after the restart. That was a rare moment of danger for Klopp’s team and they continued to create the better of the game’s few opportunities. Milner, part of a midfield trio that allowed Liverpool to dominate possession and retain composure throughout, sliced wide when stretching for Adam Lallana’s cross. Lallana made only his third start of an injury-hit season on the left of Liverpool’s attack but was more prominent when switched to his preferred position on the right.

Roberto Firmino should have troubled Casillas for the first time when sent clear of the Porto defence by Jordan Henderson’s astute pass. Felipe, the visitors’ captain and centre-half, recovered well to force the his compatriot out wide before blocking the eventual shot.