Parisians barely raise a whimper as Zidane’s side march on 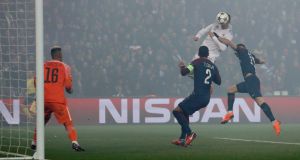 Farewell, then, Paris, a team that for all its vaulting ambition never does seem to be able to get past the spring. On a gripping, relentlessly noisy night at the Parc des Princes, second-half goals from Cristiano Ronaldo and Casemiro were enough to extinguish Paris Saint-Germain’s hopes of making it to the last eight of the Champions League.

A 5-2 aggregate victory hardly does justice to the French champions’ fine showing in the opening 70 minutes of the first leg of this tie. But the ease of Real Madrid’s ultimate victory speaks volumes not just for their own champion poise, but for the difficulty of raising the revs of the PSG project from the room temperature French league.

Unai Emery will fear for his future from here. By the end his team of plastic galácticos, down to 10 men in a stadium finally silenced, looked, if not in disarray, then tamed too easily by a distinguished, high pedigree but not invincible Madrid team.

As ever the Parc des Princes was a booming, boisterous concrete cavern before kick-off, bouncing with that very Parisian surge of noise, an act of celebration as much as intimidation It is one of the paradox’s of this cartoonishly inflated club that it has retained an authentically passionate core, a wall of noise and vigour. Football is a resilient thing. You can’t kill the spirit. Not yet anyway.

“Fais nous rêver!” read the huge red plastic banner unfurled just before kick-off and even without his injured £230m of inside forward Unai Emery fielded a collection of talent to fire the imagination. The ill-fated gamble on Giovani Lo Celso in central midfield for the first leg wasn’t repeated here, and Yuri Berchiche also came in at left-back.

For Madrid there was a moment of vertigo before the start with the news both Toni Kroos and Luka Modric had both failed to make the starting 11, with Lucas Vázquez and Mateo Kovacic coming in, tipping the scales towards the hosts in terms of paper-value galáctico power.

And so goliath met goliath, or rather the new money met old, a team supercharged around imported talent to glorify a self-regarding regime against one constructed to do exactly the same in the 21st century.

PSG started with a sense of drive. Rabiot-Verratti-Motta is a powerful midfield and in the early exchanges the spidery Rabiot in particular was able to bounce his way through the clinches.

Ronaldo may move less these days, may be fast becoming a kind of CR7-tribute, his own gloriously toned and tanned waxwork, but he remains a mercilessly imposing pair of golden boots, coming into this game with 14 goals in his last eight games.

He might have been sent off early on had he connected with a kick at Dani Alves, who did him a favour by forgetting to throw himself to the floor. Instead Ronaldo received a ticking-off from Felix Brych of Germany and no more. The privileges of extreme celebrity are numerous. It would have been a huge call in a game of this scale.

Otherwise Madrid did settle like champions. With 20 minutes gone a spell of insistent white-shirted pressure led to a corner, from which Sergio Ramos forced the first real save of the night from Alphonse Areola, who palmed away a fine, deft flick.

If PSG lacked a spark for all their early possession they also lacked precision in their set pieces, another key part of Neymar’s game that was missing here. There is something hilariously unfortunate about spending £230m on one footballer basically just so he could play in this game, only to lose him to a broken foot a week beforehand.

But PSG could still have taken the lead just before half time, Kylian Mbappé finally working the overlap on Marcelo’s flank that had been looming, but seeing his slightly scuffed shot blocked by Keylor Navas even as the Parc began to celebrate.

Benzema also should have scored five minutes earlier, scampering clean through on goal after losing the right side of the PSG defence. His low shot was well saved by Areola, who really shouldn’t have been given the chance. But with the game scoreless at half-time Madrid already had at least one foot in the last eight.

If PSG needed a crackle of life they got it now and then from Mbappé, a player able to veer and shift direction with preternatural poise. At one point early in the second half he made Casemiro literally lie down in front of him with a waggle of the hips. Madrid were coming for them though.

Ronaldo had already flashed a shot just wide early in the second half when he found the goal gaping in front of him with 51 minutes gone at the end of some wonderful work from Marco Asensio. His turn and reverse pass put Lucas Vázquez in space. The cross was perfect for Ronaldo to hang and nod past Areola for his 22nd goal in his last 13 games in this competition.

On 65 minutes the game began to recede decisively over the horizon as Marco Verratti received a second yellow card for dissent, charging at the referee after a heavy challenge and being left to repent, tearfully as he trudged off the pitch. Edinson Cavani pulled one back, deflecting the ball home after a goalmouth scramble, and sparking another outbreak of the red flares in the ultras’ end that added some illicit gaiety but interrupted the game continually in the second half.