Liverpool eager to remind Europe of their illustrious pedigree 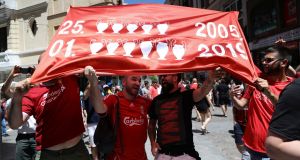 Liverpool fans in Madrid ahead of the Champions League final against Tottenham. Photograph: Aaron Chown/PA

On the streets outside Puerta de Atocha, with the throngs pouring off the trains from Madrid’s main railway station, it was possible to make out a couple of Liverpool fans who had been presumptuous enough to have “6 Times” emblazoned across the back of those familiar red shirts.

A little too presumptuous, you might think, even if it was true that Tottenham’s opponents at the Wanda Metropolitano accumulated 26 more points, lost 12 fewer games and beat them home and away in last season’s Premier League.

Or perhaps you might have seen the pictures of a banner, in the same shade of red, proclaiming that the supporters from Anfield were on a five-star trip to Madrid and intending to upgrade to six stars for the return journey – six, in this case, meaning Liverpool would leapfrog Bayern Munich and Barcelona, fives-time winners of the European Cup, into third in the all-time list.

That would be still a few behind Real Madrid, with 13, but only one short of Milan – or, with apologies to Nottingham Forest, more than the rest of the Premier League put together and twice the number of Manchester United, the club Liverpool always tend to compare themselves with.

For Spurs, the landscape is very different, shaping up for a potentially seminal night courtesy of a 95th-minute winner against Ajax in the semi-final, a 94th-minute VAR decision to harpoon Manchester City in the quarters and not forgetting Harry Kane’s 89th-minute goal against PSV Eindhoven in the group stage when, three games in, Mauricio Pochettino’s team had strayed dangerously close to elimination.

Spurs have, after all, never been in this position before. Winning would change everything: a chance to bury the preconception, once and for all, that the club do not belong to the elite, that it is a team where all the best -players feel they have to move on one day. The prize money, £16.8m, is one part. But what price the prestige? What price – to use the word with which Spurs love to associate themselves – the glory?

For Liverpool the opportunity is there to remind the football world they are one of the giants of the sport. It is not quite the same for Spurs, 58 years since they were last champions of England. But the club’s position would change irrevocably if Pochettino and his players can add the smudge of their fingerprints to that shiny old pot.

What they lack, perhaps, is the knowhow that led Jürgen Klopp to reflect that Real Madrid were too streetwise for Liverpool in last season’s final. Madrid, Klopp said, had “more natural quality, not potential but quality, and were experienced like hell. That was a different level. This time the level is much more equal. That is why we feel different but we don’t feel halfway through. We only feel positive, let me say it like this.”

It is certainly easy to imagine a team-talk in which Klopp reminds his players of that shattering disappointment in Kiev last year and asks if they want to avoid a similar ordeal this time.

It also helps that they have Allison in goal, rather than Loris Karius, and their supporters must be encouraged by the fact Spurs have lost 19 times over the season, including more than a third of their Premier League matches.

Indeed, if one were to put together a form table from the last 15 league fixtures, Spurs would be 10th. They lost seven of them, taking 23 points - not only a long way back from Liverpool and Manchester City but worse off than Crystal Palace and Newcastle among others.

On that basis alone Liverpool have to be regarded as the more likely winners, especially when they have lost only once in their previous 14 matches with Spurs. Too much is made of Klopp being beaten in each of his last six cup finals - or, as he preferred to put it, his world-record at winning semi-finals. Those defeats should not have any relevance here and the stark facts are that Liverpool have shown, repeatedly, they are the stronger team.

If Mohamed Salah, Roberto Firmino and Sadio Mané click, if Trent Alexander-Arnold and Andy Robertson start flying up and down the wings, and Virgil van Dijk and all the others play as they have all season, it is a safer bet that next week’s open-top bus parade will take place on the streets of Merseyside rather than north London.

Sometimes, though, in football it is not that straightforward and the three-week gap since either team last played might have suited Spurs now that Kane’s twanged ankle ligaments have healed sufficiently for him to play.

If, that is, you believe it is right to put Kane straight back into the team at the expense of Lucas Moura, who scored a hat-trick and played so heroically against Ajax he could be forgiven for feeling aggrieved that he is regarded as the most likely player to drop out. “It’s so painful,” Pochettino said when asked about the dilemma.

Pochettino talked about his players already having shown they can chop more fancied opponents down to size. He spoke about how they had grown with the competition, in a way that felt completely at odds with the old “Spursy” cliché. And he was right: his team could have patented the “Never give up” message that can be seen on the T-shirts of many Liverpool supporters here in the Spanish capital, copying Salah’s look from that night of all nights at Anfield when a 3-0 deficit against Barcelona turned into a 4-3 feast.

Spurs have not always made it easy for themselves and there is a remarkable statistic that a quarter of the goals they have conceded in this season’s competition have come inside the opening seven minutes of their matches. But equally they know these occasions can also be settled after the 90-minute mark.

“We are so ready,” Pochettino said. “We are ready to run, to compete, to enjoy. And to win. If we want to write our history in the game we know we have to win.”