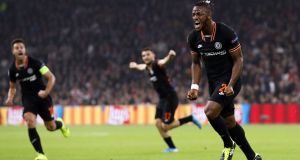 It was an occasion when Frank Lampard’s youthful Chelsea team, which featured four recent academy graduates, were placed up-close and personal with the demands of an excruciatingly high-pressure Champions League occasion.

From the first whistle, it was plain that one slip could be the difference between something or nothing in terms of the result. And nothing would have seriously jeopardised Chelsea’s chances of progress out of Group H.

This was the acid test of Lampard’s developing line-up, of their recent levels that had seen them win five successive matches in all competitions and it was one that they passed in glorious style. The resilience of their defending, especially in the first half, was a thing of beauty, with Fikayo Tomori – one of the home-grown products – earning star billing.

A draw would have been a fine result but Chelsea pushed for more in the final half hour, as Ajax ran out of steam and ideas – frustrated by the Blues’ organisation – and, at the very end, they got it.

Lampard will be praised for his introduction of Christian Pulisic and Michy Batshuayi, and the substitutes combined for the only goal on 86 minutes. Pulisic won the space for a low cross and Batshuayi’s finish crashed down and in off the crossbar. Ajax, semi-finalists from last season, were down and out and Lampard could lead the celebrations after the full-time whistle in front of the travelling fans.

Chelsea rode their luck, with the Ajax winger Quincy Promes being denied a 35th-minute goal by a hairline VAR offside call and the midfielder, Edson Álvarez, hitting a post. But Chelsea would come on strong in the closing stages to emphasis a well-judged away-day triumph.

Ajax looked to attack for long spells, squeezing high, hunting in packs and Lampard’s men had to show high levels of care in possession, which they did. Their defensive work was placed under immense scrutiny but there were several moments in the first half when Tomori distinguished himself, most notably a piece of excellent one-on-one defending against Hakim Ziyech after a loose ball out from the back by Kepa Arrizabalaga.

César Azpilicueta also made a vital last-man challenge on Promes in the 40th minute and celebrated by clenching his fists. It was that kind of night.

The tension simmered – Jody Morris was booked on the Chelsea bench after overheating slightly – and the first flashpoint came when Promes thought he had given his team the lead.

Ziyech’s shot from the right of the area deflected off Tomori and looped up kindly to the far post, where Promes tapped home. The Ajax winger’s first reaction was to look across at the assistant referee.

Everybody did. He feared that he was offside and over it went to a lengthy VAR consultation. When the first replays filtered through, Promes looked level. But when the micro-analysis started, the lines showed that he was in front of the last Chelsea defender by a matter of millimetres.

Chelsea’s best moments of the first half were provided by Callum Hudson-Odoi, who bristled with menace off the left. His pace was troubling for Joel Veltman in particular, yet an end-product was frustratingly absent. Hudson-Odoi went closest when he drove for the near corner on 15 minutes, after a slick one-two with Mason Mount, only for the in-form André Onana to save. There were two other snatched finishes from him while Azpilicueta was guilty of flashing wastefully high after 43 minutes, when he had an option in the middle.

Ajax went within a whisker of the breakthrough once again in the 59th minute and everything seemed to freeze as Álvarez met Promes’s corner and directed his header towards the far corner. The post came to Chelsea’s rescue.

Lampard’s introduction of Pulisic and Batshuayi served to change things with the former, in particular, catching the eye with his quick feet and direct running. Pulisic pulled a low shot just wide on 81 minutes and it was from his deflected effort moments earlier that Batshuayi ought to have scored. He lifted high when one on one with Onana.

The pair were not finished and when Pulisic crossed from the left the chance was on a plate for Batshuayi. This time he made no mistake and Chelsea could revel in their best result so far under Lampard. – Guardian