Alongside the talent of Verratti, Mbappé can be simply unstoppable 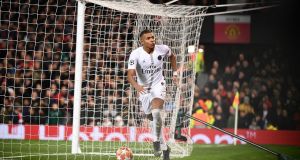 For all the complexities of elite sport, some things don’t change. In his novel End Zone, Don DeLillo obsesses about the speed of NFL running backs. “Speed is the last excitement left,” he writes. “The one thing we haven’t used up, still naked in its potential.”

In which case DeLillo could do a lot worse than have a peek at Kylian Mbappé, who glided around the edges at Old Trafford for half an hour; who scored a decisive second-half goal; and who by the end had provided some moments of exhilaration so natural and easy in among the collisions you could almost feel the stadium goggling each time he began to glide away.

United were poor here, beaten 2-0 by a superior team with a beautifully grooved midfield. Plus, of course, in Mbappé Paris Saint-Germain have the best young attacking player in the world, a talent that thrilled this grand old stage even in chastening defeat.

It had been difficult before this game not to make the obvious comparison, to set Mbappé and Marcus Rashford against one another. Not just as fine young attacking talents but as similar players of similar ages, with similar burdens of hope to carry.

It is a fairly pointless exercise. Rashford is an excellent player. Mbappé, though, is something else, a footballer who seems to have an extra gear even among the best, capable of producing moments that make the day seem to stop and bend at the edges, making other high-class footballers look suddenly gauche and lost, spectators at his show.

From the start there was the usual double-take just watching him move. Lots of players are quick. Mbappé appears to have some kind of teleportation device in his socks, a superior relationship with space, speed that comes from perfect timing and an unusual elasticity.

Speed is, of course, nothing without craft and timing. In Mbappé-Verratti, PSG had the air of a champion boxer: wearing you down with the jab, stretching your patience with those crafty inside movements, then knocking you dead with the straight right when your guard is worn away.

It was around the half-hour mark that Mbappé began to find his range, dragging the United defence deeper, causing panic ripples with each touch of the ball.

First there was a blur of a sprint in behind Luke Shaw. Then came an amazing miss from six yards out, the chance created by a lovely little pass from Julian Draxler. Next Mbappé gave Ashley Young 20 yards then spirited across in front of him like a malevolent white-shirted ghost, drawing a desperate foul.

Old Trafford had been a lovely spectacle at kick-off under those cold white lights, the full house snaking right up into the eaves of this clanky old metal enormo-drome. PSG may be a state-funded superstar vehicle but one of the joys of this club is their supporters, who bring noise and pageantry wherever they go.

Here the blue and red corner bounced and set off its flares before kick-off, cloaking the pitch in a theatrical fug of thin white smoke.

PSG sits on the most potent talent factory in world football, the Paris banlieues. But United began with two Parisians in their XI to just one for PSG, Paul Pogba and Anthony Martial versus a single Mbappé. Although it must be said, sometimes a single Mbappé is all you need.

From the start United pressed hard and high. Marquinhos took the idea of man-marking Pogba to the most thrillingly literal-minded extreme, not just following him around but mirroring every one of his steps, like a brilliantly slick provincial ballroom dance duo.

It worked, though. Pogba was strangled out of this game, unable to find the spaces he needs. Towards the end he was sent off for a second yellow born out of frustration at chasing the game, and above all chasing Verratti, the master of the spin and turn and the short nudged pass. The second half began the same way, the white shirts passing and moving, sucking United into uncomfortable shapes. And within 15 minutes the game had been taken away with surgical brilliance.

First David de Gea palmed Mbappé’s powerful downward header away for a corner. Ángel Di María’s kick was turned in by Presnel Kimpembe, charging through unmarked to the goal-line.

Then came Mbappé’s highlights-reel moment. As Di María hared away down the left, there was another sight of that pure, exhilarating acceleration, Mbappé seeming to ramp himself up like a cartoon rooster whirling its legs in a cloud of dust, then easing in between the defenders and finding the perfect little pocket of space. The cross was just right, the finish on the run high class, Mbappé rolling the ball across goal and into the corner. In the process he may well have killed this tie stone dead.

United’s midfield will not be the last outfoxed by Verratti, PSG’s own high-class passing goblin, who took the ball away and made it his own for 90 minutes. Similarly there is no disgrace in being cut open by Mbappé, whose movement here was matched by his fearlessness, the cold hard certainty of a player operating at a different level, a different speed. – Guardian service