Tottenham to push through the pain for big night at Wembley 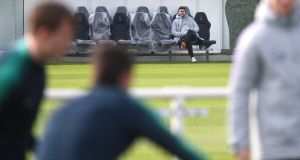 It has been a punishing schedule for Mauricio Pochettino and his Tottenham players. Since they returned from the November international break, they have played 21 times in 78 days, fighting against tiredness and injuries without reinforcements from the summer or winter transfer windows, while also dealing with the unsettling delays over their new stadium move.

The 22nd game comes on Wednesday night at Wembley and it is the biggest of the lot: the first-leg of the Champions League last 16 against Borussia Dortmund, the Bundesliga leaders. But when Pochettino looked into the eyes of his players during Tuesday’s team meeting, he saw what he wanted to see. He is not quite sure how, but they are ready for one more push.

Spurs do not play again until Saturday week at Burnley, meaning that a much-needed mini-break is in store and, by the time they go to Dortmund for the second-leg on March 5th, the cavalry – in the shape of Harry Kane and Dele Alli – is expected to be back. Kane has targeted the Burnley game for his return from ankle ligament damage while Alli, who has a hamstring problem, should not be too far behind him.

And so the clarion call has gone out. Jan Vertonghen urged the club’s fans to turn out in force, setting aside their misgivings about Wembley to create the sort of atmosphere that was felt during the team’s run to the same stage of last season’s Champions League, while the players must find a way to summon yet another display of resilience.

“I think you can feel the energy in the eyes of the players,” Pochettino said. “We were talking in the meeting and it’s completely different.

“You can feel that it’s the Champions League, that it’s going to be a massive game with, I hope, a full stadium at Wembley and, of course, the energy and motivation is going to be there. Whatever happens, I am going to reward the players with some days off so that they can breathe a little bit and enjoy because the schedule has been crazy.”

Since the November break, Spurs have taken 33 points in the league – only Liverpool, with 35, have more – while they pulled off what had been described as “mission impossible” to emerge from their Champions League group, with a Wembley win over Internazionale and an away draw against Barcelona. The club had taken just one point from their opening three ties.

It is difficult to quantify what the results have done for team spirit and belief and, unsurprisingly, it has led to some fighting talk.

Nobody inside the camp wants to forget, too, how they beat Dortmund at home and away last season; took four points from Real Madrid and ran Juventus close in the last 16.

“We can beat anyone,” Vertonghen said.

“We have shown that last year. Over two games, we were the better team against Real Madrid, who were the eventual winners of the trophy. That is why it was a shame we could not do better last year, because we felt we should have done better.

“That is why everyone has the feeling we can do it this year. We feel so good as a team and we know a couple of guys will come back [from injury] after the first-leg, as well.”

Not for the first time, Pochettino complained about how Spurs had to face Leicester last Sunday, rather than Saturday – which was when Dortmund played their Bundesliga game against Hoffenheim. To him, the extra 24 hours of rest time are crucial and he suggested that they had cost him the services of Danny Rose, who suffered a shin wound against Leicester.

“With one day more, maybe Danny can be available, but to reduce the time in between both games – Sunday and Wednesday – is nearly impossible,” Pochettino said. “It will be impossible for him to start. We will see if he can be on the bench.”

With Ben Davies out with a groin injury, Pochettino is expected to start Vertonghen at left-back. Dortmund, however, have selection problems of their own and they will be without Marco Reus (thigh), Paco Alcácer (shoulder), Julian Weigl (flu) and Lukasz Piszczek (foot). Jadon Sancho, the 18-year-old England winger, is set to start, although his return home got off to a bad start when he forgot his passport and delayed the team flight.

It promises to be a gripping occasion, and the Wembley attendance will not be capped, meaning that Spurs can hope for a huge crowd.

“We had some great Champions League games at Wembley last season and we need that again,” Vertonghen said. “It definitely helps when the stadium is full and rocking. I bet we will see that.”