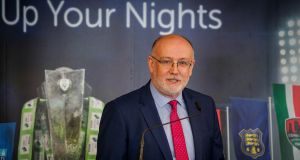 The Irish League has made clear in a statement that it has yet to agree to any plan to have its title holders play a two-legged “Champions Cup” against the League of Ireland winners in November.

The new competition, which is to consist simply of a two-legged, home and away, tie between the top sides on either side of the border, was announced at the launch of the new Airtricity League season in Lansdowne Road on Tuesday morning.

The FAI’s Competitions Director, Fran Gavin, broke the news that the new competition would take place but suggested that the detail of it would be announced at a later date.

Shortly afterwards, the Northern Irish Football League issued a statement in which it said that it “noted” the announcement in Dublin and had been “aware that initial discussions had taken place between the Irish FA and FAI but did not expect any formal announcements at this stage”.

“We look forward to consultation and receiving further detail regarding this opportunity, which we will consider with our member clubs.”

Gavin also said that the FAI have been talking to the Scottish FA about ensuring the problems that arose with, and because of, the scheduling of the Irn-Bru cup quarter-final between Bohemians and East Fife are not repeated next season.

Meanwhile, Derry City are still hoping to sign Institute striker Michael McCrudden in time for Friday night’s league campaign opener against UCD at the Brandywell. The 26-year-old, who is the Irish League joint top scorer with 19 goals this season, has signed a pre-contract agreement with City and is due to join in the summer, but manager Declan Devine says he has not given up on getting the player in before the weekend.

“Would we like to get a deal done before Friday? Absolutely, we would,” he said at the Aviva. “We’ve made another offer. We’ve gone back to the club to see if they are interested in doing anything before the weekend.

“At this moment in time, nothing’s happening and Friday might come a bit too quick, but all we are trying to do is see where we can go with it. If not, we’ll wait until the summer.

“I think we’ll still have goals in us. We have signed Junior Ogedi-Uzokwe on loan from Colchester, David Parkhouse has come in from Sheffield United at 19 years of age and I think he will have a big impact on the league this year, I think he’s very exciting; a return to the old style of centre forward . . . 6’2”, works extremely hard, good in the air, good at holding the ball up and then there’s Eoghan Stokes who is already well known around the league.”

City’s opponents on Friday, UCD, suffered a significant blow ahead of the season’s start when Evan Osam suffered an Achilles injury in training on Monday night. The 21-year-old defender is likely to be out for months and could miss the entire campaign.