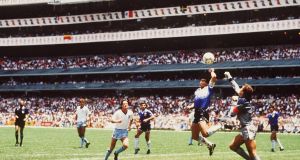 Argentina’s Diego Maradona gets his hand to the ball ahead of England goalkeeper to score the ’Hand of God’ goal during the World Cup quarter-final at the Azteca Stadium in Mexico City during the 1986 World Cup. Photograph: Bongarts

Brexit has divided communities, families and friends, so it should perhaps come as no surprise to find it has done the same to England’s 1986 World Cup squad.

After Theresa May survived a vote of no confidence by Conservative MPs on Wednesday, several members of the side which reached the quarter-finals in Mexico offered their thoughts on social media. They revealed a divide as great as the one in the England defence when Diego Maradona dribbled straight through it.

Goalkeeper Peter Shilton and midfielder Peter Reid found themselves particularly at odds. “Have been so impressed with @Jacob_Rees_Mogg @Conservatives @itvnews with interviews in the last few days”, Shilton wrote on Twitter. “He really knows what he is talking about and puts it across in a calm and calculated manner!”

The former Everton enforcer Reid, whose long-time team-mate Neville Southall is now one of the most prominent socialists on social media, took against Shilton’s remarks. “I’ll agree to disagree on that one Goalie”, Reid wrote. “He’s loopy, doesn’t know his arse from his elbow.”

With no reply forthcoming from Shilton, Reid posted again, making a point regarding Rees-Mogg and the possibility of a People’s Vote: “Of course, if your talking about hedge funds moving to Dublin he’s excellent. Oh he wanted a second vote on brexit, but changed his mind. Which is his democratic right.”

England winger Chris Waddle also shared his views, posting a message almost nihilistic in its content. “Well done Theresa May,” he wrote on Twitter, “Now let’s leave with no deal.” Waddle subsequently deleted the message, suggesting either that he didn’t want the hassle of a 1,000 replies from pro-remain tweeters, or that it may have been an example of the former Newcastle player’s dry humour gone a little awry.

Gary Lineker has long been the Twitter face of ‘Retired Footballer with Political Opinions’, and the 1986 Golden Boot winner couldn’t help but join in. He retweeted Waddle’s message before it was deleted and added the prefix “stick to football”. It’s a message Lineker himself has received on innumerable occasions on social media, something Lineker acknowledged with the addition of a crying/laughing face emoji.

England were defeated 2-1 by Argentina in the 1986 quarter-final which also featured Diego Maradona’s infamous “Hand of God” goal.

Hope remains that Bobby Robson’s boys can find common ground once again, while defender Terry Butcher is yet to share his thoughts on the subject. But it could be worse, however, after the captain of another successful England side used the moment to sing the praises of Donald Trump.

Michael Vaughan, who led England to their legendary Ashes victory in 2005, responded to Wednesday’s events in Westminster with another subsequently deleted tweet: “Give me a Donald Trump style leader over any of our leaders any day of the week #JustSaying”.

Seán Moran: Let’s leave the confusion aside and enjoy this All-Ireland 06:30
Gordon D’Arcy: Ireland don’t need to do a Finn Russell on it 06:00
Beibhinn Parsons ready to move on the next level 06:00
CJ Stander ready for Italy after lockdown sheep battles 06:00
Aki, Ringrose and Henshaw: Brian O’Driscoll has his say on Ireland’s midfield riddle 06:00

1 Gordon D’Arcy: Ireland don’t need to do a Finn Russell on it
2 Golf in Level 5 Covid restrictions: Clubs still waiting to hear if they can remain open
3 Aki, Ringrose and Henshaw: Brian O’Driscoll has his say on Ireland’s midfield riddle
4 CJ Stander ready for Italy after lockdown sheep battles
5 Hugo Keenan could start in changed Ireland team against Italy
Real news has value SUBSCRIBE