Former Republic of Ireland international has had spells in Greece, Turkey and Iran 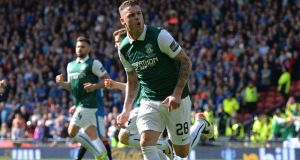 The 32-year-old has returned to Scottish football more than two-and-a-half years after leaving Hibs for a third time, having fallen foul of then manager Neil Lennon over disciplinary issues.

The former Republic of Ireland international has since had spells in Greece, Turkey and Iran, the latter of which ended when he left Persian Gulf Pro League champions Persepolis following the coronavirus outbreak.

Stokes has had some troubles off the park in recent years but manager Gary Holt had vowed he would be prepared to give any player a chance if they embraced the club’s work ethic.

Speaking on Friday, Holt said: “I don’t think we have to sell Livingston as a club and the stature of what’s gone on the last couple of years but I still think we have to make players aware of how we work, the environment we set, how we go about it, because it’s damn hard work first and foremost, it’s putting a shift in.

“You will enjoy it while you do it because the environment is what we set. When you sit down face to face and talk to someone, you want a chance. I needed a chance and fortunately Livingston gave me that chance.

“We will see what comes with players when we get the opportunity to talk to them.”

The latter two will join the squad for Sunday’s Scottish Premiership clash against Aberdeen, who returned from their own coronavirus shutdown with a 1-0 win against St Johnstone on Thursday.

Holt said: “They are a really good side, they are unfortunate they have a few injuries as well but they have players that can play, that many teams would take.

“So we know how difficult it is going up there, how hard it’s going to be, but we have got to take the qualities we have shown in the last two games and the belief that we can go up there and get something.

“There have been really good games between both teams since I’ve been there and I expect the same.”