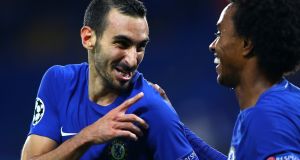 Antonio Conte had entered September wary of a treacherous and cluttered schedule, Chelsea’s head coach braced to chop and change his line-up in the hope of negotiating successful passage through seven games in 21 days. That workload, he feared, would stretch his squad to the limit. As it transpired, his team’s return to European competition will not have sapped energy levels in the slightest. Their reunion with the Champions League was a stroll.

Qarabag were dismissed here, the home side easing back into life at this level with six goals to savour. Atletico Madrid and AS Roma will offer far sterner tests than this, but Conte must have rejoiced in the ability to rest Alvaro Morata and David Luiz, and haul off Cesar Azpilicueta, Pedro and N’Golo Kanté, while his team ran riot. Life will be tougher from now on in.

This was Qarabag’s debut in this competition and, whatever the club once from the war-torn city of Aghdam but now exiled in Baku achieve this season, their progress to this stage will always rank as remarkable. Yet they collided here with a team still stung by one year’s non-involvement among the elite and overseen by a head coach who has much still to achieve in the Champions League, with the outcome rather chastening.

The Azerbaijanis, with their sprinkling of Brazilian, Haitian, Spanish and South African attacking talent, were overwhelmed defensively from the outset as Chelsea swarmed forward. The energy levels were maintained through a one-sided first period. The tie felt settled with the shrill of the half-time whistle.

It was on the flanks where the hosts were at their rampant best. Willian, a figure revived this season after last term’s lull in form, tore into Jakub Rzezniczak and Wilde-Donald Guerrier, with Pedro just as effervescent on the opposite wing. Cesc Fàbregas prompted from the centre, Kanté was his customary blur of energy, while both wing backs sprinted into enemy territory with glee.

This was Davide Zappacosta’s home debut but, already, he appears a smart addition and a player who could prove to be this year’s Marcos Alonso. The Italian would have his moment on the half-hour but, by then, the home side were ahead and threatening to run up a cricket score.

They had eased themselves into the lead early while Qarabag players were still wheezing at the ferocity of the initial onslaught. Rashad Sadygov had already been forced to block from Alonso when, from the resultant short corner, Willian clipped a pass to the edge of the area. There lurked the unmarked Pedro whose vicious shot, curled first time, flew into the net via the diving Ibrahim Sehic’s touch.

The goalkeeper did well to deny Willian a second, but there was a vulnerability to the visitors’ back-line that was always going to be punished. Sure enough, Zappacosta collected from Thibaut Courtois deep inside his own half, burst beyond two retreating opponents on the touchline and, having glanced towards the centre to spy a team-mate, flung over an attempted cross that veered over the unsuspecting Sehic. The goalkeeper had taken a step off his line in anticipating of collecting a cross, but the ball ended up flying over his dive and into the far corner. Zappacosta celebrated with gusto in front of the Shed end and Chelsea already felt out of sight.

There had only been flashes of attacking intent from Gurban Gurbanov’s side, usually sparked by Pedro Henrique off the right or, occasionally, the eager running of the lone striker, Dino Ndlovu. Yet the more potent threat was always Chelsea’s, even with Alvaro Morata resting up on the bench and Eden Hazard impatiently pounding the touchline as he waited to be introduced.

The Belgian entered the fray once the lead had been further extended, Fàbregas collecting Willian’s short free-kick and exploiting Gara Garayev’s hesitancy to curl over a centre with the outside of his right foot. Azpilicueta, free on the edge of the six-yard box, duly guided home a header to register his first Champions League goal.

This had long since become a stroll, the visitors’ composure having drained and panic gripping. Willian whipped a shot on to the crossbar but each attack offered hope of reward. There were still 19 minutes remaining when Hazard crossed into a cluttered six-yard box where Michel and Badavi Huseynov rather cramped each other’s style, the ball rebounding from the Spaniard and into Tiemoue Bakayoko’s path. The substitute, only just introduced, slammed a first Chelsea goal in from close range.

What the hosts had been missing was a goal for Michy Batshuayi, Morata’s deputy and a player so craving opportunities. When his chance came, courtesy of Maksim Medvedev’s slack pass from right back and Bakayoko’s interception, he took it with aplomb, skimming a shot beyond Sehic from just outside the penalty area.

The Belgian was involved in another son after when Medvedev scored an own goal, whereupon Chelsea mercifully declared.

Johnny Sexton circles the wagons and insists Ireland are improving 16:08
Dave Miley is the new Tennis Director for the Kazakhstan Federation 13:45
Spanish tennis player gets eight-year ban for match fixing 12:11
Thomas Bach to stand unopposed for re-election as IOC president 11:57
Sexton and Henshaw return to training ahead of Scotland clash 11:01