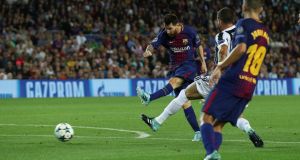 A mesmeric Lionel Messi scored twice as he inspired Barcelona to a 3-0 win over Juventus to get off to a flying start in Champions League Group D on Tuesday, avenging last season’s quarter-final elimination by the Italian champions.

Messi broke the deadlock on the stroke of half-time by playing a slick one-two off Luis Suarez and arrowing the ball beyond Gianluigi Buffon, finally getting the better of the veteran Italian in his fourth game against him.

The Argentine was also the catalyst for the second goal, forcing Juve to scramble the ball off the line and allowing Ivan Rakitic to shoot into an empty net in the 56th minute and add to his strike against Juve in the 2015 final.

But Messi was far from done. For his second and Barca’s third he received a pass from Andres Iniesta and ripped more holes in a depleted Juventus defence before lashing beyond a dejected Buffon, scoring his seventh goal in three games.

Juventus, who were missing five key players including defensive warrior Giorgio Chiellini, looked a shadow of the team that beat Barca 3-0 on aggregate last season to reach the final, and have conceded seven goals in their last two games in the competition over two seasons.

Like Barca, Juve arrived at the game with three wins from three in the domestic league and with their own Argentine Paulo Dybala also in electric form with five goals in three games.

Miralem Pjanic did manage to trouble Barca goalkeeper Marc-Andre ter Stegen in the first half but the Spaniards, who have been facing instability off the pitch but look fresh and confident on it under new coach Ernesto Valverde, did most of the talking.

Messi gave the Italians nightmares from the word go, but captain Andres Iniesta was also in electric form, while record signing Ousmane Dembele had an impressive full debut, making for a party atmosphere at the Nou Camp to accompany the show put on by their relentless Argentine talisman.

“When we play at this speed it’s very difficult to play against us,” Rakitic told reporters.

“Barca don’t change coaches very often but now we have new ideas and we’re very happy with how things are going.”

Sporting Lisbon claimed an impressive 3-2 win at Olympiakos thanks to three goals in a stunning first half-display in the other Group D match.

Goals from Seydou Doumbia in the second minute and Gelson Martins just over 10 minutes later left the home side shell-shocked and created a platform for Sporting to take the points.

Bruno Fernandes added the visitors’ third goal in the 43rd before two late second half goals from Olympiakos substitute Felipe Pardo made the scoreline more respectable for the hosts.

AS Roma clung on a for a 0-0 draw at home to Atletico Madrid in Group C thanks to a string of fine saves from goalkeeper Alisson on Tuesday.

The Serie A side were also indebted to a superb goalline clearance by Kostas Manolas from Koke, immediately followed by another Alisson save, in the first half.

Roma have a dismal recent record in the Champions League and Tuesday’s result extended their winless run in the competition, including qualifying matches, to seven games.

Alisson saved his best for stoppage time when he dived low to his left to block Saul Iniguez’s downward header and the Atletico player then fired the rebound over from point-blank range.

Bayern Munich got off to a winning start in the Champions League for the 14th successive season on Tuesday with a comfortable 3-0 victory over Group B opponents Anderlecht who played most of the game with 10 men at the Allianz Arena.

Striker Robert Lewandowski received a pre-match slapdown from Bayern chief executive Karl-Heinz Rummenigge after criticising the club’s transfer policy, but the Pole showed his value on the pitch by scoring his seventh goal in six games this season from the penalty spot after being hacked down by Sven Kums, who received a red card.

The dismissal made a daunting task become even more difficult for the visitors who went further behind on 65 minutes when Thiago Alcantara side-footed a second from a cross by Joshua Kimmich.

Niklas Suele had another effort disallowed for a foul before Kimmich rounded off the night by waltzing round the goalkeeper to roll the ball into an empty net for Bayern’s third.

1 No Masters, so Tiger Woods battles son Charlie for green jacket
2 My favourite sporting moment: Roscommon minors restore pride to a county
3 Germany well ahead of the curve as Bundesliga gears up for return to action
4 Stephen Kenny: ‘I want people to come and look forward to watching this team’
5 America at Large: Hurling fan Dowling leading the fight against Covid-19
Real news has value SUBSCRIBE