Ken Early: John Delaney inflicted austerity on everyone in Irish football but himself 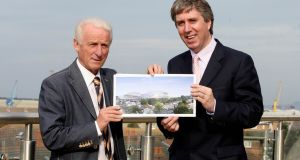 John Delaney ran Irish football for nearly 15 years and yet the single defining day of his time in charge is easy to identify. It was Thursday, September 18th, 2008, when Delaney announced the Vantage Club ticket scheme on the roof terrace of a tower in Dublin’s Docklands.

Also in attendance that sunny autumn afternoon were then Republic of Ireland manager Giovanni Trapattoni, the late broadcaster Gerry Ryan, and Andrew Hampel, chief executive of ISG, the agency the FAI had hired to help with the strategy for ticket sales at the new Aviva Stadium.

Three days earlier, Lehman Brothers had collapsed. It would be another 12 days before the Irish government announced the bank guarantee but it was already clear that something was going seriously wrong

The news that 10-year tickets would be priced as high as €32,000 had left a lot of people dumbfounded. These outlandishly-expensive tickets – more than 2.5 times as expensive as the top rugby tickets – were being launched against the backdrop of what had started to look uncomfortably like global economic meltdown.

Three days earlier, Lehman Brothers had collapsed. It would be another 12 days before the Irish government announced the bank guarantee but it was already clear that something was going seriously wrong.

His optimism was backed up by Hampel, who spoke about the apparently insane plan in a tone of such calm assurance, with such a steady confident gaze, that you started to reproach yourself for entertaining doubts. Surely this smooth and elegantly-suited man knows what he is talking about . . .

Of course, the near-universal scepticism that initially greeted the Vantage Club prices proved well-founded; the scheme was a disaster from day one. There may still have been tens of thousands of millionaires in the country even after the economic crash, but few of them wanted to watch Giovanni Trapattoni’s Ireland.

In the years that followed Delaney would continually cite the recession as the cause of the FAI’s financial problems. The truth was that his own inability to accept that the Vantage Club had failed had massively compounded the damage.

By January 2009 he was already being urged by people in the sales operation to reduce prices by 40 per cent or more, but he continued to insist that it would all work out, that the FAI just had to find the millionaires. He could not come out and admit that he had got it horribly wrong. It would be almost three years before the first price reductions were announced.

Delaney had been just a normal FAI CEO who had made some bad calls and some okay ones. The doomed Vantage Club condemned Irish football to a lost decade.

By then the attendances at matches had collapsed, tickets could easily be had for pretty much any game, and the sense that Ireland tickets were something you ought to block-book years in advance no longer existed.

Until that day in September 2008 Delaney had been just a normal FAI CEO who had made some bad calls and some okay ones. The doomed Vantage Club condemned Irish football to a lost decade.

Looking back at my own notes from that time I can find plenty of references to the fact that the Vantage Club was priced too high to work. I notice, though, that the criticism is invariably expressed in practical rather than ethical terms – “this is a bad scheme because it’s not going to work”.

Absent from these notes is any sense that the scheme was wrong because its values were wrong. Why was the Irish football team being marketed to 33,000 millionaires? Why was the FAI trying to turn the home games into the preserve of an elitist club? If Delaney had lost sight of who and what the game was supposed to be for, he was not the only one.

He seemed to want to be liked and would try to establish personal rapport with twinkly-eyed bantering comments. In my case his usual thing was to make some jokey remark about my hair. I could never think of anything to say in response and our relationship didn’t really catch fire.

The only occasion I interviewed him at length was in September 2011, when he agreed to appear at an Off The Ball roadshow event in the Odeon on Harcourt Street.

He arrived with a big group of friends and at the outset he was in ebullient form. He was happy to speak about the train he had hired to take travelling Ireland supporters from Bratislava to Zilina for the qualifier against Slovakia the previous year. The fans had liked that train. A friend had taken an iconic photograph of Delaney on the platform at Zilina, holding aloft a can of Carlsberg while a hand emerges from the throng surrounding him to grab hold of his tie.

After a while we got around to asking him how he, as the CEO of a small and financially struggling sports body, could justify his €400k salary. The mood darkened. He said we were “boring the audience”, who had no interest in such trivia. I didn’t agree, but I do remember a shout from the audience – “I thought this was a football show not an economics show!”

At the end of the interview the programme cut to an ad break while the crowd applauded. As we stood up and shook hands, Delaney leaned in with an accusing look and said: “I thought we were going to talk about football!” His disgust and outrage was plain. He stormed off and these would be the last words we exchanged for several years.

I didn’t understand why he appeared to feel the questions about his salary had been some kind of stitch-up or ambush. Why would we have asked him on to “talk about football”? In all the time he had spent at the FAI I had never heard him say anything interesting about the game itself. He wasn’t the manager or a former player, he was an administrator, and therefore questions about his management of the FAI and its finances were the only kind of questions that seemed really relevant.

If Delaney was angry about being asked about his salary, it was because he knew there really was no plausible way he could justify it

Years later I spoke to an FAI official who said that Delaney had been assured beforehand by an intermediary that the questions would all be about football. If so, his sense of grievance was at least partly legitimate, and I feel a little bit guilty about what happened.

But then I think about the workers let go by the FAI, while the association paid Delaney’s €3,000 monthly rent, or the Irish women’s team having to get changed in airport toilets while the FAI picked up the €8,000 bill for Delaney to stay at the Ritz, and the guilt quickly subsides.

If Delaney was angry about being asked about his salary, it was because he knew there really was no plausible way he could justify it. He will be remembered without fondness, as the CEO who inflicted a decade of austerity on everyone in Irish football except himself.