All in the Game Italia 90 special: Gazza’s antics and Jack’s name problem

Quotes of the tournament and memorable moments from the World Cup 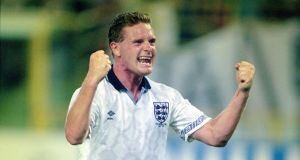 Quote of the tournament

“Comparing Gascoigne with Pele is like comparing Rembrandt with Rolf Harris.” – Rodney Marsh painting the Gazza hype as a touch over the top.

4: That’s how many of the Italia 90 competing nations no longer exist, if you know what we mean – the Soviet Union, Yugoslavia, Czechoslovakia and West Germany.

Jack Charlton, as we know, wasn’t the best at remembering players’ names, even his own bunch, so the chances of him being able to identify members of the Egyptian team at Italia 90 were always going to be on the slim side. So, when he was asked to name the Egyptians who caught his eye in their opening group game against the Netherlands, this was his, eh, scouting report:

No wonder we were so well prepared for the game.

“Eire We Go Again.” – The Daily Mirror’s take on England’s draw with our lads, a headline that would have worked beautifully if only Eire rhymed with ‘ere.

“When it is the Egyptians’s turn, they may think back nostalgically to the days when all that inflicted them from the heavens were frogs.” – Having watched Ireland play England, The Guardian’s David Lacey feared for Egypt and the aerial bombardment coming their way.

“There were no surprises in this game which turned out to be an internecine British affair based on brute strength and concentration rather than intelligence.” – Italian paper La Stampa’s take on the Ireland v England contest, one they appeared not to enjoy tremendously.

“I have Gary Lineker’s shirt up in my room and it’s only stopped moving now.” – Mick McCarthy was happy, though.

Considering the damage drink has done to him through the years, you’d be uneasy reading back some of the boozy anecdotes Paul Gascoigne told about his time at Italia 90, but still, on the bonkers scale, they were unrivalled.

The maddest of the lot was, perhaps, the one he recounted in a 2011 book, “Glorious: My World, Football and Me”. The gist of it was that he was tired listening to team-mate David Platt going about how wonderful Aston Villa owner Doug Ellis was, how “he has the best yacht, he’s installed the best pitch, he’s flown to the moon”, and so on.

So, on one of their days off, some of the players headed for the beach from where Gascoigne spotted a huge anchored yacht. “I shouted, ‘Ooh look, Dougie and his boat.’ I started to swim out to it and a few of the lads followed .... as we got nearer I was calling out, ‘Oh Dougie. Oh Dougie. Where are you? Just then a bloke peered over the side. ‘Hello Paul.’ F*** me, it was Doug Ellis.”

The players boarded and a good time was had by all, apart from that moment Gascoigne jumped on Gary Lineker’s wife and the two of them fell overboard.

The adventure ended with Gascoigne attempting to swim ashore but discovering he was, well, heading in the wrong direction. He ended up having to be rescued by two men in a dinghy.

“It was Gary Lineker and another bloke. ‘Get in you daft b*****d,’ he said. When I looked up it was Nigel Kennedy, the violinist. ‘Give us a tune then, Nige,’ I said. ‘Handel’s Water Music?’ he laughed. I didn’t have a clue what he was on about.”

“Watching Paul McGrath playing so well even though he is out of position is like listening to Yehudi Menuhin playing the accordion.” – Jimmy Magee on McGrath playing his opponents like a violin.

‘He won’t get past that challenge!’

The opening match of Italia 90 produced one of the greatest ever World Cup shocks, reigning champions Argentina losing 1-0 to Cameroon, Francois Omam-Biyik getting the winner. But the game is also remembered for what is generally regarded as one of the worst tackles ever seen at a World Cup, when Benjamin Massing came close enough to sending Claudio Caniggia into the middle of next week.

It was in the closing moments of the game, Caniggia charging upfield as Argentina were frantically searching for an equaliser. He managed to hurdle two Cameroon players who attempted to bring him down, but there was no getting past Massing who went flying in to Caniggia with a full-on body check. Such was the impact, both Cannigia and Massing’s boot ended up airborne. Needless to say, a red card followed.

Massing died in 2017, at the age of 55, but before then he had been tracked down by author Simon Hart who spoke to him about the tackle. Was he full of remorse? Eh......

“It’s a nice thing for me. Wherever I go, it’s: ‘Ah, he’s the one who did the tackle on Caniggia.’ Everywhere. Everyone says it to me, even when I went to Equatorial Guinea a few years ago for the Africa Cup of Nations. It’s what people recognise me for. So I have to say, it’s affection I get more than anything else – and if it was a source of money, I’d be a rich man.”

Big Ron gets away with it

It was back in 2004, you’ll remember, that Ron Atkinson’s media career all but ended when, believing his microphone had been switched off, he was heard to say that Chelsea’s Marcel Desailly “is what is known in some schools as a ****ing lazy, thick n****r”. He was promptly forced to “resign” from ITV and parted company with The Guardian, where he was a columnist.

Had he form in this area? Did he what. He was working alongside Brian Moore on an Italia 90 game involving Cameroon when, after describing one of their players as “absolutely brainless”, he added:

“I’ll only get into trouble if his mother’s back home watching the game sitting up a tree.”

It wasn’t until 14 years later that time caught up on the fella.

1 Gerry Thornley: Munster will make for interesting case study when rugby resumes
2 Alain Rolland to step down from World Rugby position
3 Game Changers: Gary O’Toole took a stand when others turned their heads
4 Chelsea talk the talk but still struggling to walk the walk
5 Georgia and Fiji in line to join Six Nations sides in eight-team tournament
Real news has value SUBSCRIBE
Crossword Get access to over 6,000 interactive crosswords