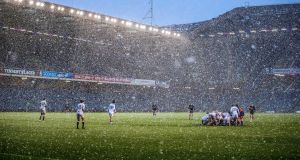 A view of today’s game at Murrayfield. Photograph: Craig Watson/Inpho

The defending champions play Adam Griggs’ Ireland on Sunday week with both sides chasing a Triple Crown after unbeaten starts to their respective campaigns.

Today’s match was switched to Murrayfield and played behind closed doors following Sunday’s postponement in Glasgow because of Storm Ciara.

And England made up for lost time by moving top of the table above Ireland on points difference, setting up a key encounter between the countries later this month.

Sarah Hunter’s team followed last season’s 80-0 victory over the Scots by running in eight tries as snow fell in the Scottish capital, including doubles for full-back Emily Scott and wing Abby Dow.