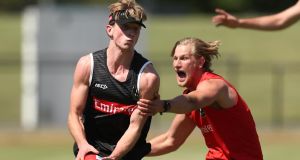 Anton Tohill (left) is to return to Collingwood in Melbourne and will undergo two weeks of quarantine when he arrives in Australia. Photograph: Michael Willson/AFL Photos via Getty Images

Six former intercounty footballers have been cleared to return to Australia this weekend to resume their AFL careers after winning visa approval to re-enter the country.

Collingwood pair Mark Keane from Cork and Anton Tohill from Derry, Essendon duo Cian McBride from Meath and Ross McQuillan from Armagh, Brisbane’s James Madden from Dublin and Greater Western Sydney’s Callum Brown from Derry are all set to travel back to Australia this Saturday.

All six players headed back home to Ireland once the AFL announced its shutdown plans in March due to the Covid-19 outbreak. According to the AFL website, they will all head straight into mandatory 14-day quarantine stints in hotels as part of the strict measures taken for international arrivals by the federal government.

The AFL is set to resume its 2020 season on June 11th, with players back in training from last Monday and set to be tested for Covid-19 twice a week. AFL chief executive Gillon McLachlan unveiled the league’s plans for the resumption of a 17-round regular season last week, the new fixture details still to be confirmed.

The competition was suspended on March 22nd amid the coronavirus pandemic after just one completed round. Players have resumed modified training with groups of up to eight since Monday, before stepping up into full contact drills on May 25th.

Established Bombers defender Conor McKenna from Tyrone arrived back last weekend, but the 24-year-old is a permanent resident of Australia, unlike the rest of the Irish contingent, who are subject to tighter border restrictions.

With the assistance of an independent immigration expert, the AFL, the players’ clubs and the AFLPA also collaborated to assist: while AFL-listed players have been denied from playing state league football in 2020, the return of the remaining six Irishmen is seen as a boost for their development inside club environments.

Collingwood football manager Geoff Walsh told AFL.com.au the club was excited to get Keane and Tohill back: “We’ve been working together with a few of those clubs who have the Irish boys over there,” Walsh said.

Other Irish players including Geelong’s Zach Tuohy and Mark O’Connor, Hawthorn’s Conor Glass and Conor Nash and Sydney’s Colin O’Riordan opted not to return home during the season shutdown.

However the season resumption hasn’t brought good news for former Kerry footballer Tadhg Kennelly, one of the club casualties at the Sydney Swans as they continue to make cuts as a result of the consequences arising from the coronavirus pandemic.

Kennelly played a winning role in the Swans’ 2005 Premiership triumph, and after guiding their defence last year, was set to be a central part of coaching the their midfield alongside the recently-retired Jarrad McVeigh. But McVeigh will now assume full responsibilities with a maximum of 25 football department staff now permitted inside clubs.

“We have had to combine roles and look for efficiencies where we can find them to maximise the contribution of every role within the 25 head count,” said Swans head of football Charlie Gardiner.

“That has also resulted in the stand-down period for 10 full-time staff being extended, while a large number of part-time and casual staff are not able to be re-engaged.

“All have been wonderful servants of the club – we are feeling for them and their families. Unfortunately, we do not know what the future holds, as we continue to see the landscape change throughout this crisis. What we do know is the impact of these changes will be felt for some time to come.”