With her Olympic dream on hold until 2021, the boxer got stuck in on the front line 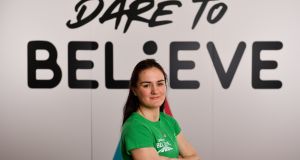 The panel of judges for our sportswomen awards have had some tough challenges over the years, not least all those headache-inducing times when they had to choose monthly or annual winners from formidably lengthy lists of contenders. April 2020, though, produced a challenge of an unprecedented kind, because – and you might have noted this – there was no sport.

The April deliberations, then, were rather brief, our number of contenders amounting to zero.

So, initially, we reckoned the only option was to press pause on the awards and wait for some normality to return to the sporting world. But all the while we were hearing about the priceless contributions so many of our sportswomen have been making to their communities since the coronavirus struck, and we concluded that they deserved to be saluted as much for that as anything they have achieved in the sporting arena.

So, for the duration of these strange times, and until they can return to competing in their respective sports, we decided there’d be no harm in picking out one sportswoman each month and doffing our collective caps to the efforts they are putting in to helping the people around them.

First up, we’re going for the mighty Kellie Harrington, an inspiring character in the best of times, but even more so these past few months.

The irony is that after the 2019 she endured, Harrington would have been looking forward to 2020 more than most. It was last June when she had to withdraw from the final of the European Games after breaking her right hand, the injury also denying her the chance to defend the world title she had won in 2018 in India.

When she returned to action six months later, her eyes were set on sealing a place in the Olympics, but it was during the qualifying tournament in London that the sporting world was, like everything else, locked down. And the Olympics, of course, were postponed until next year.

When she returned from London to Dublin, Harrington, like all her team-mates, had to go in to quarantine for two weeks, but when she emerged from it she chose to return to her job as a cleaner in St Vincent’s Hospital in Fairview. She could have opted to spend her days watching Netflix, like many of us, but, as she told Ryan Tubridy last month, “I told them that I’m there for cover work that needs to be done, because people had taken holidays and people were sick. I knew they were going to be out on their feet in there, so I just offered myself to go in and I’ve been in there every day since.”

Her frontline work includes cleaning the hospital’s newly opened isolation ward, a hazardous task that Harrington had no qualms about taking on. “There is a great feeling in the hospital, this has brought everyone together,” she said. “The household staff, the maintenance staff, the nurses, doctors, office staff, everyone is pulling together and it’s brilliant.”

And when she’s not cleaning, she’s busy entertaining the patients and staff, not least by shadow boxing to the tune of We Will Rock You and Eye Of The Tiger while they all clap and cheer along – as we saw in that video she posted. There aren’t too many folk out there having their spirits kept high by a world champion boxer.

She has also found time to get involved in the campaign to help people deal with both the physical and mental impacts of the Covid-19 crisis, #InThisTogether. Her focus has been on encouraging us all to keep active, although she has underestimated how many of us have two left feet. “Switch on some music, you can do anything, it doesn’t have to be anything too strenuous. In five or ten minutes those good endorphins are released. Dance like nobody is watching!”

Meanwhile, she’s carried on training in her homemade gym, her partner Mandy given the task of doing pads with her. Mandy will deserve a medal of her own come the end of this.

And Harrington will, no doubt, return to winning medals one day, but for now her reward is the appreciation of those whose lives she is helping every single day.

In her record 16th appearance at the European Cross-Country Championships, and a record 38th senior appearance for Ireland, the Wicklow woman just missed out on a medal in the individual race, finishing two seconds behind the bronze winner, but led the team to silver, Aoibhe Richardson and Ciara Mageean’s top 20 finishes sealing the success.

While most of their success to date had come on the road, the pair having won five gold medals at Para-cycling Road World Championships, they transferred that pedigree in to their performances at the Track World Championships in Canada in January, winning silver in the Tandem Pursuit and breaking their own national record en route to that medal.

It had been another outstanding season for the Tipperary jockey who earned a place on our roll of honour even before she rode Honeysuckle to victory at Cheltenham in March. By then she’d sealed the award for February, the highlight of which came at Leopardstown when she did a Grade One double on the opening day of the festival, including the big one on Honeysuckle in the Irish Champion Hurdle.

The central defender has been one of the stand-out players in Ireland’s European qualifying campaign so far, the Balbriggan native at the heart of a defence that has conceded just three goals in five games. It was at the other end of the pitch, though, that she made a key contribution against both Greece and Montenegro in March, scoring the only goal of the game against the Greeks before getting the crucial opener in Montenegro six days later. Those six points left Ireland top of their qualifying table.

1 Ken Early: Why international football is fading into obscurity
2 Colin Kaepernick’s exile is too fresh for NFL to speak out on US protests
3 ‘A radical departure’: Who are CVC and what are their plans for rugby?
4 Marcus Rashford says society ‘more divided than ever’ in anti-racism message
5 IRFU plan gives club rugby hope of return to action this year
Real news has value SUBSCRIBE