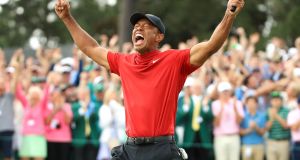 In a parallel universe, Augusta Masters fever is beginning to take hold around now. The timeless ritual and everything just-so for what has always felt a bit like sport’s version of the Truman Show: the lushness and instant familiarity of the course even if you’ve never been within a thousand miles of the place, the lovingly-tended magnolia and yellow jasmine and azaleas, the brooks and ponds, the course turtles and of course the gentle undercurrent of sexism and lingering upper-South race consciousness and the invariably gripping human dramas which unfold whenever the best golfers in the world pitch tent and duke it out for the iconic, emphatic-green sports jacket which looks good on precisely nobody.

Even if you don’t particularly care for golf, it’s impossible not to be fascinated by the Augusta Masters because of what the place is: the most merciless of all sports theatres. Augusta is one huge Venus flytrap: beautiful to look at and play on until it snaps its jaws and eats you up.

Over the decades the world has watched as golf’s most mercurial performers have, it seems, been toyed with by the deceptive way the course chews up vanities and aspirations and reduces even-tempered men to near tears.

At its best it is incredible, cruel theatre, watching players who looked like gods on the Thursday and Friday slowly fall asunder with this pastoral beauty as a backdrop.

As things stand, Tiger Woods remains the Masters champion. You sometimes have to do a double take when you remember that. It’s difficult to pinpoint a starker public story of catastrophic fall and slow redemption. Woods had fallen to 1,119th in the world during the years when persistent back injury compromised his play and there were tournaments when even those who didn’t much like him must have feared that he would embarrass himself.

In a recent interview with Ewan Murray of the Guardian, the ever-honest Rory McIlroy described his feelings after last year’s frustrating experience at Augusta, when he landed in Georgia as tournament favourite and then finished tied 21st, a distant eight shots behind the new vision of Woods in supersonic form.

“I wanted to get out of there. It has been a disappointing week, I wanted to get home. I removed myself from it and thought, Jesus, this is unbelievable. The longer Tiger is at the top of the game, the better it is for all of us. I messaged him. Anytime I win a tournament or have a chance, he is the first one to text me. All the time.”

There is something about that “all the time” remark that jumps out. All very nice for Woods to drop the game’s most indiscriminately talented player a good luck message every now and again. But a text shooting through from the coldest competitor the game has known every single time you look like winning a tournament feels like something is different. It feels like the message is: I’m watching to see what you do here.

In a parallel universe, the release of Michael Bamberger’s study of Woods spectacular reboot, aptly titled The Second Life of Tiger Woods, would chime perfectly with the speculation and intrigue of the approaching Masters tournament.

Instead, it hits the shelves with golf, like every pastime in the world, in a vacuum. In a strange way, that’s no bad thing because it gives the golf world time to pause and think about Woods’s life experience over the past decade.

Few sports stars have been so intensely scrutinised and watched in the history of sport: maybe Ali and maybe Michael Jordan. The possibility of speaking with Woods or getting time with the people close with him is impossible. And anyway, speaking with Woods would be a waste of time because even when he is in expansive and communicative mood, there is a moat beyond which nobody on the outside is ever allowed beyond. So as Bamberger says: “The only thing you can really do is watch him.”

That’s what has been happening to Woods long before he won his first Masters in 1997. Even for the 11 years when he reigned as the ultra-controlled, serial winner who broadened the appeal of golf, Woods’s childhood and family and professional relationships were mined for any little hint as to what made the dude tick.

A decade on, the grand-scale humiliation of Woods and the drip-drip release of the latest salacious detail as what had been a tightly-guarded private life spilled all over the tabloids and talk shows has begun to look like a bit of coursing. The demand for public morality had to be sated and so Woods appeared in a totally alien guise: contrite, humbled and evidently desperate. And after that, he entered his wilderness years as the fallen god of American sport, a disgraced and even pitiful figure.

When the one thing he had done brilliantly – golf – seemed to desert him, who would have swapped places with him? If there was a sense of eerie manifest destiny about the way Earl Woods shaped and guided his son towards golf omnipotence, it would appear that little thought was given to what it would feel like to be the person inside the most fearsome and impressive golfing competitor the world had ever known. Much of the outside evidence would suggest bleak and lonely. Many pieces have been written and documentaries made which present Woods is a less than flattering light.

Bamberger has covered Woods from his amateur days and his book is a study of his slow reclamation of his sense of self through golf since the year that open season was declared on his personal life. It doesn’t matter what your opinion is on the decisions Woods made in his private life: imagine having one’s interior world held up for global judgment, criticism and, ultimately for entertainment.

“It would be impossible for your mental health not to take a hit,” Bamberger noted in the same interview. And it is hard to argue against that or against the notion that in some way, Woods was hunted for sport and entertainment when it all fell apart.

That he ought to be coming back to Augusta as Masters champion next week is irrelevant in the grand scheme of things. It has always seemed as if Tiger Woods’s only true rival on the golf course was with his legacy – and the quest to eclipse Jack Nicklaus’s haul of 18 Majors. But at the age of 44, his other rival is Time. The suspension of golf leaves Woods’s late burst in limbo even as he stands alone, two decades on, as golf’s burning obsession.