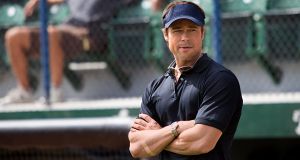 It will never make the highlight reels at the Oscars or the 100-greatest-movie-moments lists but there is a small point worth fiercely arguing that among the best ever motion picture moments was the one starring Robin Wright and Sean Penn as young-old flames walking through the night in Phil Joanou’s neglected crime drama ‘State of Grace’. (It had the supreme bad luck to be released at the same time as Goodfellas and disappeared).

Nothing much happens other than an awkward conversation which finishes with the couple dancing (“just the slow ones”) somewhere dingy to Sinead O’Connor’s once-heard-never-forgotten ballad ‘Drink Before The War’.

It’s only a few seconds but long enough for the atmosphere to jump through the screen. The actors obviously felt there was something authentic in the moment too: they got married not long after the film was released 30 years ago.

Appearing in under-rated masterpieces might be a quirk of Robin Wright’s career because she also pops up in what just might be, after everything, the best film about sport ever made. There have been a lot of such lists popping around in recent weeks but ‘Moneyball’, although highly regarded and all the rest, has never gotten the kudos it deserves. Even though it looks and sounds better than ever approaching the 10th anniversary of its release.

For many, many years now, ‘Raging Bull’ has habitually lorded over all other contenders in the best-ever sports category. But the last time I watched it, at least, what stood out wasn’t the lauded fight scenes or Robert De Niro doing his tragic Marlon Brando impersonations as the fact that Cathy Moriarty quietly stole every single scene in which she appeared.

There’s a moment about half an hour into Moneyball in which Brad Pitt’s Billy Beane is sitting late and alone and sleepless in a house which is scarcely decorated because all he can do is think about his all-consuming life as general manager of his struggling baseball team, the Oakland A’s. He is perturbed and mulling things over and makes a call, uncaring of the hour, to a young baseball analyst, Jonah Hill’s Peter Brand.

Beane had been a teenage baseball prodigy whose early promise had disintegrated in the major leagues, a harrowing experience which has haunted him through his life. Beane’s is the most common story in sport: blazing potential unfulfilled. He knows that Brand, a mathematician/baseball nut, will have pored over his stats sheets out of curiosity. He wants to know if Brand would have drafted him in the first round.

At first, the younger man hesitates and fumbles and falteringly says that he would. “Cut the crap. Would you have drafted me in the first?” Beane insists. There’s a long silence and then comes the cold, analytical reply he had craved. “I’d have taken you in the ninth round. No signing bonus. I’d expect you would have passed and taken a college scholarship.”

All his vanities are torched. Beane listens and then tells Brand to get packed: he’s just bought him from the Cleveland Indians as his new statistician. If it had only been for the non-stop cracking low-key scenes featuring Pitt and Hill during which they attempt to assemble a winning team out of cast offs and under-valued players, a team made up, in Brand’s perfect phrase of “an island of misfit toys”, Moneyball would still have been a very good film.

But then there’s also the fact that this is a true story you are watching. And that, loitering around on the edges of so many scenes you have the late great Philip Seymour Hoffman improbably cast as the A’s despairing and wonderfully sardonic head coach. And a director, Bennett Miller, who has touched gold in two completely different and equally strange films, Capote and Foxcatcher, and about whom there is absolutely no hoopla.

There’s the reams of actual footage from the historic record-breaking 2002 season during which the A’s stunned baseball with a 20-game winning streak and spliced through with convincing fictional film baseball scenes and set against a music score by another relatively unheralded craftsman, Mychal Hanna. There’s a series of terrific lines - “How can you not be romantic about baseball?”

There’s no major show-stopping scene in the entire two hours: what Moneyball does is drag the audience behind the stage, behind the big show of professional sport, into the meetings rooms and weights rooms and grim offices where life is steadfastly unglamorous and lonely and cutthroat.

Anytime the cameras move outside, the weather seems chilly and downbeat. There’s a scene in the film where Beane levels with David Justice, the former Yankees hitter and the A’s big-name signing who, at 37, is in the declining years of his baseball life. The player hits in the batting cage, brushing off the manager’s attempts to cajole him.

“I know your routine. It’s patter.”

Beane does that thing he does with his mouth whenever he’s about to lose his cool. “Oh, you’re special?”

“You’re paying me seven million bucks a year, man. So yeah. Maybe I am a little bit.”

“”No man, I ain’t paying you seven,” comes the retort.

“The Yankees are paying half your salary. That’s what the New York Yankees think of you. They are paying you three and a half million dollars to play against them.”

The essence of professional sport is all in there: money as the bottom line, the player as commodity, the pride and ego and the on-going exchanges which feel like a series of tiny wars, won and lost. It takes some genius to convince an audience that doesn’t even care about baseball to become emotionally invested in the story of a coach attempting to crack the code through mathematics.

But the true brilliance of Moneyball is that it isn’t even really about whether the A’s win or don’t win as it is a gorgeous study of human frailty and disappointment and the thousands of ways in which people are under-valued.

And, of course, what makes the film truly different is that there is no winner. There’s no everlasting triumph. It’s just the season ending and Beane sitting with Brand, looking around the forlorn, post season dressing room as though noticing it properly for the very first time.

“What a dump,” he says fondly.