Sideline Cut: Dublin, the big bad wolf of summer, has feelings too

The nature of last Sunday’s match made it Mayo’s story but what about the Dublin fans? 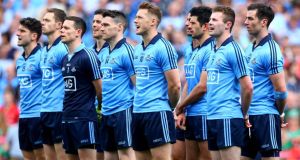 And what about Dublin’s football ghosts? Let us not suppose here, as the world and the circling planets warms hands on the fire that will emanate from Croke Park late this afternoon, that Mayo are the lone star when it comes to missed opportunity and feeling haunted.

True, we can’t ever doubt, after last Sunday’s dream works, that Mayo have an unsurpassable flair for Gothic football drama. Just listen back the closing minutes of Midwest radio’s broadcast if you wish to get a sense of the kind of mad thoughts coursing through the minds of Mayo people for those few minutes. Their sense of self was entirely wrapped up by what was happening.

There is an unforgettable passage in the early part of Patrick McCabe’s The Dead School describing the effect of hearing Michael O’Hehir commentating on the radio on an All-Ireland championship Sunday, the tenor of the RTÉ man’s voice climbing with the excitement: “Half the time you thought he was going to burst into tears or just go completely mad shouting ‘Oh Jesus. Oh f--k. Oh no. Oh please God no!’ But he just kept on going, shouting through every window in the town until he got hoarse.”

It would have been entirely natural if, during the midst of Mayo’s mad, beautiful comeback, the Midwest radio team had done just that: stopped commentating completely and surrendered themselves to staccato bursts of jubilation and despair.

Because right until the very second it looked as if Mayo might somehow win the match, they seemed destined to lose it.

But through all of it Mike Finnerty managed to maintain enough composure to vividly call the chaos as it unfolded on the pitch below him.

Beside him sat John Casey, a former Mayo star who has actually been out there and done that as the sharp-shooter who pushed Mayo to the brink of heaven in 1996. That experience was of no use to him last Sunday. Being an observer on this match was enough to break him.

“I can’t take this, Mike,” he confessed live on air. “I want this match blown up.”

It was all contained in that furious bolt for survival from this generation of Mayo players – the cause, echoes of previous defeats, a refusal to be beaten and their perpetual question: how soon is now?

The Croke Park stewards who believed they had seen it all couldn’t ever recall the place as antic or as loud as it was during the crescendo on Sunday. The nature of the match made it Mayo’s story.

Still, what about Dublin? In the excitement there has been little thought about what it must have been like for the city fans. Imagine standing on the Hill watching what unfolded.

Imagine that dread; the agony of seeing it all dissolve. For the past four years Dublin fans have heard and listened to a barrage of material declaring their team to be invincible; that Dublin have all the advantages, all the money, all the options.

That phrase: you look at their bench. And, yes, they won the All-Ireland of 2011; two generations of Dublin supporters got to feel like what it was like to be on the nice side of the Dublin-Kerry rivalry. But they came back from the brink that year, recall. The city was never as carefree as it was on that Sunday night.

A year later they fell into a 10-point hole against Mayo before losing the All-Ireland semi-final. In 2013 they were the best team in Ireland and won a second All-Ireland after edging past Mayo by one point in a queasy game.

Then came 2014 and that infamous afternoon against Donegal.

Recall how imperious the Dubs looked for the first 15 minutes? They looked set to obliterate the Ulster champions. And then came the hour which must have been scarcely believable for Dublin fans.

There has been an aura of atonement about the Dubs this year in the way they have gone about their business. And yet you can’t legislate for a season-ending injury to Eoghan O’Gara nor for last Sunday’s red card to Diarmuid Connolly, who is more sinned against than most players nowadays. These things happen.

So today tens of thousands of Dub fans face the slightly spooky prospect of facing a team with a sense of manifest destiny about them.

It came in the tall and laconic figure of Maurice Fitzgerald in 2001 and in the combustible hues of Owen Mulligan in 2005. Population didn’t seem to count for as much back then.

To be a Dub supporter in Croke Park must be the best and worst. Yes, they swagger and they sing like they own the place. But they are there to be shot down on days when their team can’t do it.

Year after year they put up with the big west of Ireland football counties landing up for the weekend with their interminable selection of ballads banging on about this girl and that mountain.

The Dubs put up with the conceit that the city’s best bars are, in fact, the provenance of Tipperary or Galway or Kerry or wherever. Try being there on a Tuesday night.

They suffer the endless west of Ireland guff about the Wild Atlantic Way, the fresh air and – oh, have you tried surfing?