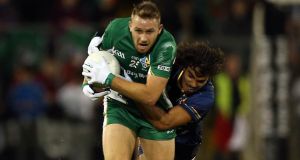 Ireland’s Ciarán Sheehan (left) and Christopher Yarran of Australia could cross paths again sooner than expected with the news that Cork forward Sheehan has signed on with Australian AFL side Carlton Blues. Photograph: Donall Farmer/Inpho

One of the first things Brian Cuthbert spoke about following his appointment last month as Cork football manager was the quality of young players coming through, but he probably didn’t expect he would be calling on so many of them so soon.

Confirmation that forward Ciarán Sheehan has signed a two-year contract with AFL side Carlton Blues means Cuthbert is suddenly without six of Cork’s best players for 2014 – assuming he doesn’t lose anyone else to injury or retirement.

Sheehan is intent on giving the AFL his best shot: he spent four weeks in the summer of 2009 training with the Melbourne club, but opted not to sign full-time, citing homesickness as the main reason for staying with Gaelic football.

‘Great opportunity’
“I thought a lot about it and didn’t take the decision lightly,” he said of his move back. “It’s a great opportunity that I didn’t want to turn down. Leaving home is very tough and not playing for Cork or Éire Óg is a difficult thing to take. But this is something I wanted to do, so I’m going to go for it.”

It comes on the back of the recent retirements of five of Cork’s All-Ireland winners in 2010, Pearse O’Neill, Graham Canty, Paudie Kissane, Noel O’Leary and goalkeeper Alan Quirke – and means Cuthbert will be forced to call on more of the Cork minors he guided to the Munster title in 2010.

Sheehan scored a point in the 2010 All-Ireland final win over Down, and still only 22, will join up with the Melbourne club that already features Zac Tuohy of Laois and has also just signed Ciarán Byrne of Louth.

Sheehan also played a starring for Ireland in the recent International Rules series victories over Australia, and represents perhaps the biggest loss for Cork in recent weeks, despite the plethora of high-profile retirements.

Board meeting
Meanwhile, the Limerick county board have announced they will stage a special board meeting this evening in Claughaun to ratify the new senior hurling and football management teams for 2013.

Speculation continues as to who will replace John Allen in the hurling seat, with former county captain TJ Ryan still in the running to join up with former manager Donal O’Grady.

There is also enduring speculation that Cork selector and former All-Ireland winning goalkeeper Ger Cunningham is about take charge. Cunningham opted out of the Cork set-up for 2014 mainly due to work commitments, although he did meet with Limerick officials to discuss the possibility of replacing Allen.

Here is your handy guide to sport on television this week 17:01
Sam Bennett on top again as he takes Paris-Nice first stage 16:55
Fulham consign Liverpool to sixth-straight defeat at Anfield 16:25
Relegation looms for West Brom after Newcastle stalemate 14:14
Rangers crowned Scottish champions as Celtic slip up 13:59