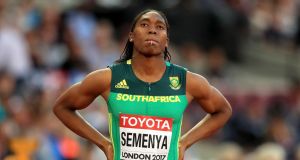 No athlete deserves to be burdened with the repeatedly sketchy attention that Caster Semenya has been getting over the last eight years – only at this stage it’s clearly not all down to her either.

Semenya was just part of another unbreakable display of women’s 800m running inside the London Olympic Stadium last night – and that was only in the qualifying heats.

After falling just short of winning the 1,500m on Monday night, Semenya duly won her heat here in 2:01.34, extending a now unbeaten 23-month winning streak at that distance, going back to when the IAAF was forced to suspend its ruling on intersex athletes and hyperandrogenism, in 2015.

Unless she runs the wrong way, Semenya should continue that streak far beyond Sunday’s final, as the only two women looking any way capable of beating her are Francine Niyonsaba from Burundi, and 21-year-old Kenyan Margaret Wambui, also understood to be athletes with hyperandrogenism – or elevated testosterone levels seemingly to be of particular benefit in women’s 800m running.

They won gold, silver and bronze at the Rio Olympics last summer, and no other woman has finished ahead of these three since 2015 either, again since that IAAF rule was suspending, and is currently being reconsidered by the Court of Arbitration for Sport (CAS) in Lausanne.

Wambui also won her heat here in 2:00.75, and going quicker again was Niyonsaba, who win the sixth and final heat in 1:59.86. Only a major upset will prevent those three from standing on the medal podium.

Among those cut adrift from qualification in their wake last night was Ireland’s Síofra Cléirigh Büttner: running in the fifth of the six heats, Büttner only made to London as a late call-up under the qualifying quota, and after a long collegiate season in the US, although she ran determinedly nonetheless, finishing sixth in 2:06.54, her heat won by the American Charlene Lispsey in 2:02.74, Büttner’s race not helped by clipping the curb down the backstretch.

Asked afterwards about the presence of Semenya and company in her event, Büttner diplomatically declined: “To be honest I’m only here to talk about me. It’s beyond my power, and the only thing I can control is my own racing. I’m here for the experience and to run the event I love, and 100 per cent there’s no reason I shouldn't be back here and in finals. In two years time I’ll be 24, and I definitely have a lot more in me.

Büttner now returns for her final year at Villanova, and with a best of 2:01.98, can certainly aspire towards a World Championship: whether she can ever aspire towards beating athletes of Semenya’s class is part of the question CAS are currently trying to answer in deciding whether or not to restore the IAAF ruling, where athletes with hyperandrogenism must undergo hormonal treatment to lower their elevated testosterone levels to within what is considered normal range for women.

Semenya herself is clearly tired of the subject: “It’s been the lyrics since 2009,” she said after finishing third over 1,500m, which at least temporarily quietened those suggestions she is running with an unfair advantage over other women. “It’s quite boring. I really don’t have time for nonsense. You have to understand I’m an athlete.”

Britain’s Laura Muir, who finished fourth behind Semenya in that race, didn’t want to address the subject either – although for what was interpreted as being for other reasons. “I’ve not got anything to say about that,” said Muir who was also back on the track last night, qualifying as a fastest loser for the 5,000m final, but looking like she’ll be leaving London without a medal.

Winning the women’s 400m hurdles was 10-1 outsider Kori Carter – and running in the outside lane too – beating fellow American and Olympic champion Dalilah Muhammad in 53.08 seconds.

As victory salutes go what Ramil Guliyev produced in the men’s 200m was utterly in tune with the nature of his win: no one expected Guliyev to deny Wayde van Nierkerk of South Africa the 200m/400m double, least of all himself, but he did exactly that when winning in 20.09, van Nierkerk a very close second on 20.11. Just not close enough.

It was a complete upset for Guliyev, who was born and raised in Azerbaijan but transferred to Turkey in 2011: he carried both flags with him around the victory lap, taking the Azerbaijan flag first, and taking the crown held by Usain Bolt since 2009.

So the only 200m/400m World Championship double remains with the American Michael Johnson, done 22 years ago. In truth the six races in six days seemed to catch up with van Nierkerk, who looked in a winning position coming off the bend, just couldn’t hold it to the line.

After squeezing two qualifying rounds into Wednesday night, Isaac Makwala from Botswana also fell off, finishing sixth in 20.44 – and perhaps feeling some of the ill effects of the vomiting bug which forced him out of the 400m final.

Burnley hold on for a point to leave Arsenal stuck in 10th 14:43
Owen Doyle: Culture of ‘clip memory’ among modern referees not cutting it on the pitch 13:30
European Indoors: Sarah Lavin and Sean Tobin clock lifetime bests to advance 13:20
Lions tour will not take place in Australia this summer 11:39
England all in a spin once again as India seal the series 11:00