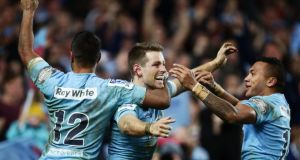 Bernard Foley (centre) of the Waratahs celebrates with Kurtley Beale (left) and Alofa Alofa (right) after scoring a try during the Super Rugby semi-final against the Brumbies at Allianz Stadium in Sydney, Australia. Photograph: Matt King/Getty Images

Outhalf Bernard Foley scored a brilliant late try and kicked 11 points to fire the New South Wales Waratahs into their third Super Rugby final with a 28-6 win over ACT Brumbies.

Foley finished off a breakaway move that started deep inside the Waratahs own half four minutes from time to seal a home final next weekend against the Canterbury Crusaders, who beat South Africa’s Sharks 38-6 in the earlier semi-final.

The Waratahs, who lost both their previous finals to the Crusaders in 2005 and 2008, had been set on the path to victory by opportunistic tries from winger Alofa Alofa and centre Kurtley Beale at the start of each half.

The Brumbies, beaten finalists last year, played a full part in a hugely physical contest but were only able to cross once through winger Henry Speight in the 31st minute and failed to score after the break despite dominating possession.

Crusaders methodically ground down the Sharks to score four second half tries and canter to a 38-6 victory in Christchurch earlier on Saturday.

Captain Kieran Read, wingers Nemani Nadolo and Johnny McNicholl, scrumhalf Willi Heinz and flanker Matt Todd all scored tries for the homeside, who dominated throughout and held the visitors scoreless in the second half.

The victory relieved some of the pressure on coach Todd Blackadder, whose side had not reached the final since 2011 and have not won the title since he succeeded Robbie Deans in 2008.

“Extremely satisfied, knowing we are going to the big stage next week is an awesome feeling,” Read said in a televised interview. “We are really pleased with that performance. We started well, played at a high tempo early on and put them under pressure.”

1 Ireland 23 Georgia 10: How the Irish players rated
2 Sordid murder of hurling brothers still resonates in south Galway
3 Ireland grind their way to grisly win over Georgia
4 Nicky English: No surprise that Limerick and Waterford in final
5 Jim McGuinness: There is a way to save championship and make it competitive
Real news has value SUBSCRIBE