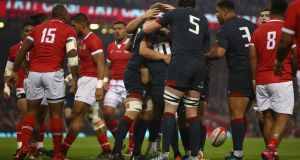 Wales outhalf Dan Biggar after scoring a try against Tonga at the Principality stadium in Cardiff. Photograph: Getty Images

Liam Williams scored two tries on his 50th appearance for Wales to help secure an emphatic 74-24 victory over Tonga at the Millennium Stadium on Saturday.

Wales, who made 14 changes from last weekend’s 9-6 victory over Australia, survived an impressive rally either side of halftime from the Pacific islanders that briefly saw Tonga level the scores before the experience and unerring pressure from the home team took them to an eighth test victory in a row.

But Tonga, who fought back to 24-17 at halftime after conceding three tries in the first 12 minutes, managed three tries of their own through locks Leva Fifita and Steve Mafi and number eight Sione Vailanu, as their powerful forwards battered the Welsh defence.

Wales raced into a 22-3 lead, set on their way when they were awarded a penalty try inside three minutes after their maul was illegally stopped by Fifita, who was sent to the sin-bin.

Biggar scored the second try three minutes later as he passed 300 points for Wales and Williams grabbed his first to seemingly take the test away from Tonga with barely a quarter of the game gone.

But the visitors began to dominate the forward exchanges and after Fifita and Mafi had barged their way over, Vailanu levelled the scores three minutes into the second half and an upset was on the cards.

But from that moment Wales took control of the test with some excellent play with ball in hand and ran in a further seven tries for their biggest victory over Tonga.

Wales’s eight test wins in a row represents their best run of form since 2004-2005 and they can extend that further in their final November international against South Africa in Cardiff next Saturday.